Today marks the first day of Wild Moccasins Week! East of 8th will present Wild Moccasins with Common Deer at Nashville’s High Watt on March 8th. Until then, you have the chance to get to know both bands better all week long! 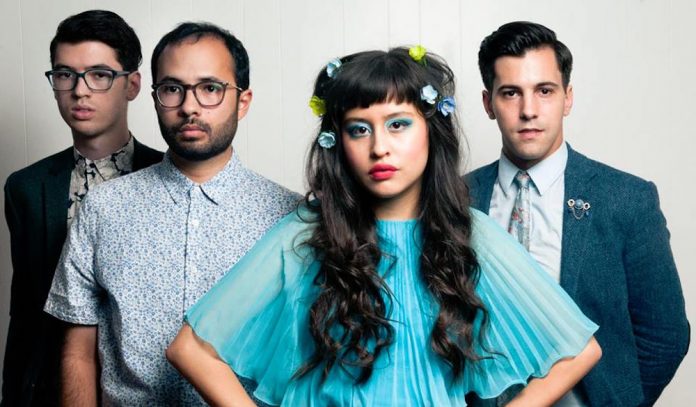 After a brief hiatus to adjust to a new lineup, indie-pop quintet Wild Moccasins are back and better than ever. To kick off their much-anticipated comeback, the band is gearing up to head out on tour for the first time since 2015.

Starting in Little Rock, Arkansas and playing a finale in their hometown of Houston, Texas, Wild Moccasins couldn’t be any more excited to hit the road again. “We get cabin fever very easily, so we’re looking forward to getting back out on the road. If anything, the mode we’re in is a did-we-leave-the-stove-on kind of mode, because we just have to tie up all the loose ends before we hit the road again,” says Cody Swann, guitarist and vocalist of the band.

Forming in their high school days as a two-piece band, Wild Moccasins eventually evolved into the electrifying, four-person indie-pop outfit they’re known as today. “Cody and I started dating in high school. After a few years of dating, we started going to shows and sharing this love of music. Then one day, randomly, I was just like ‘I kind of like singing’ and then we just started writing songs,” explains Zahira Gutierrez, frontwoman and keyboard player for the band.

For both Gutierrez and Swann, music has been a part of their lives since they were kids.“I’ve been singing ever since I can remember. My mom has photos of me as a two-year-old playing toy keyboards and singing. I’ve always loved it so much. I’ve always felt this strong emotional connection to music,” Gutierrez admits. Swann, on the other hand, learned music from some very musically-inclined neighbors. “My mom and dad are not artistic at all. They definitely love music in their own way, but they didn’t expose me to it a lot. I was very lucky that the family that grew up across the street from me was an artistic family. Someone was always playing the piano. As a kid, that really hit me hard and I enjoyed it so much that I started with piano. It wasn’t until I was around 13 or 14 that the same family started teaching me guitar,” explains Swann.

Not only have Wild Moccasins’ family and friends influenced their music, but Swann and Gutierrez both admit they owe much of their success to their hometown. Listeners might be surprised to hear such electrifying pop sounds coming from a state known for its Southern roots, but taking a deeper look into Wild Moccasins’ unique hometown might explain their inimitable sound. “Even though we may not sound like what people think of when they think of Texas, we’re from a unique city. It’s easy to find a way to fit in here because everyone is so accepting,” says Swann. Bands sometimes have a hard time “fitting in” to their local music scenes, but Wild Moccasins admit they got lucky in terms of their place of origin. “Houston is just that type of city. Anyone can do pretty much anything and you’ll be accepted because they’re just used to how different everybody is,” says Gutierrez.

Like others, Wild Moccasins also admit much of their musical inspiration comes from other artists. Ranging from pop to rock to 90s hip-hop, no genre is off limits for the band. In fact, much of their last record was inspired during their time touring, simply listening to one another’s iPods. “I think for this latest record, we probably listened to a lot of R&B, a lot of post-punk and dream pop stuff. Even that would be kind of selling it short because it’s just kind of in the moment. What you’re listening to that day could make it into a song. It’s kind of like cooking,” says Swann. “As musicians, we become obsessed with different genres of music at one time,” adds Gutierrez.

Similar to their ever-changing music tastes, Wild Moccasins admit their dynamic is constantly changing, too. A self-proclaimed “nerdy girl” in high school, Gutierrez confesses it wasn’t easy to start a band as a student. Feelings of insecurity may have belittled her in the past, but those struggles only helped Wild Moccasins grow into the unapologetically genuine group they are today. “To just stay sane, a lot of it is being totally true and trying to go for the best of whatever it is you’re working on. Whether it’s a music video, a song, album art, or photo shoot, it’s about feeling like you can be completely honest,” says Swann.

The band has no plans on changing this sentiment anytime soon. Already being South by Southwest veterans, the band is scheduled to play the 2018 festival again this year. Even after years of festival and live performance experience, Gutierrez and Swann admit the chaos still gets the best of them from time-to-time. “Whenever it is your first year doing something, I think it always stands out to you the most. I look back fondly, but I also laugh at ourselves. The very first year we did it was 2008, and we did nine shows in a span of three or four days, and I know people who’ve done more,” says Swann. “Now when we go, we just expect chaos,” adds Gutierrez.

Gearing up for their upcoming tour and South by Southwest performances, Gutierrez and Swann can’t hardly contain their excitement to let listeners indulge in what they’ve been working hard on these past few years of silence. “The last couple of years we have been writing and recording our last record. It’s coming out very, very soon,” explains Gutierrez. “We’ll be playing a lot of new stuff at these upcoming shows and it’s really exciting to get to perform these songs that we’ve been working on for so long.”