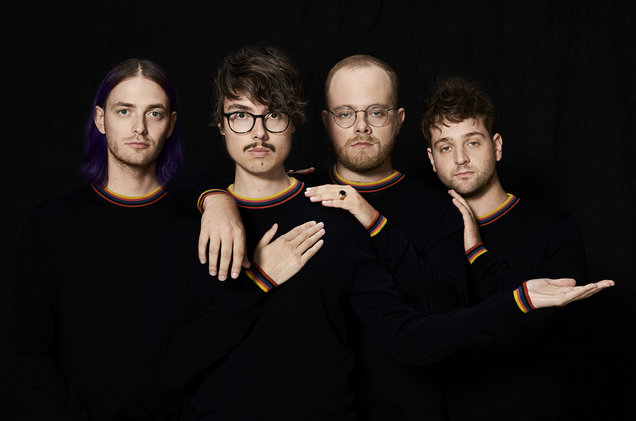 “I love experiencing Nashville, it has great coffee and great food. But playing there is a whole different thing,” levels Daniel Armbruster, frontman of Rochester, New York’s own electro-rock outfit Joywave. The band is on the second leg of their tour in support of their latest release, Content, which brings them to The Basement East in the Music City on Wednesday, February 28th. “So many people there are musicians, and I get it. I feel like we’ve broken through that in a lot of major cities, and people will come to our shows and go nuts. But in Nashville, people are looking at us and thinking ‘I’m a better singer that he is’ or ‘I’m a better guitar player than he is’ and the hard part about it is, I know they’re right,” he laughs.“

Don’t let that self-deprecating humor fool you—Joywave is a formidable force making irresistible earworms with body-shaking beats that dare the stoic to remain still. They’ve also come a long way together as a band, which started over a decade ago while the group was still in high school. “I started a band in high school with Joey our guitar player and Paul our drummer; we were a struggling local band from 2002 until 2010. We decided that wasn’t working,” Armbruster quips. “I was working a dead-end retail job, and quit to spend all my time writing. Joywave was born. Things like the collaboration with Big Data came along, which was a side project that Alan Wilkis in 2012 and 2013. Nothing had gone right for me in music my whole life, and basically, within a week, Hollywood Records wanted to sign Joywave because they loved ‘Tongues’ and ‘Dangerous’ was getting radio play, so I left Big Data to join my high school friends and do Joywave.”

With fans spanning ages 80 to eight, Joywave is definitely onto something. “We like to get ‘em when they’re young. When we were finishing up our first record, our guitar player has a son who is six now, and he was there when we were listening through it in the studio,” he recalls. “He was three at the time, and I could tell something was working when he stopped playing and looked up to see where the sounds were coming from like there were cartoons somewhere.” Along with their musical appeal, Joywave captures a nostalgic aesthetic with their look, their stage design, and their online presence—the era of the old-school computer.  “We grew up in the CD-Rom era,” explains Armbruster. “The idea of the new record, it’s called Content but a lot of people misinterpreted it as CON-tent; the entire point was about how people are consuming music now, and how people are consuming everything—constantly opening their phones, looking to be bombarded with something to surprise them or distract them from whatever they’re doing. It’s not how I grew up listening to music,” he continues. “The first record has samples from certain Disney movies on it, a clip from Bambi where Thumper is talking about how delicious clover is which comes before the song ‘In Clover’ on the record. The flow of the record necessitated that the clip comes after the track ‘Parade’ which is right before ‘In Clover.’ People don’t understand why it’s there because they don’t listen to records anymore in the order they’re supposed to be listened to, they just listen to songs on playlists,” he adds. “It’s mixtape culture, which is cool, but I’ve always been an album guy.”

The band has its irons in several fires, everything from Little Leagues team sponsorships to coffee production, and most recently, has jumped on the cryptocurrency craze with their recent tongue-in-cheek introduction of Joycoin. “We’ll all be millionaires very soon,” he laughs. “It stems from our local corporation in Rochester, Eastman Kodak, which has delved into the blockchain sphere to introduce their own cryptocurrency, and we are following suit. I figured if everyone’s just printing their own money now, we might as well get in on it. It’s a great way to fund our upcoming tours. Just print your own money! It’s brilliant!” he laughs. “I can’t believe no one thought of it sooner.”

Tough Nashville crowds aside, Armbruster is looking forward to the February 28th show, which Joywave will headline. “It’s the biggest tour we’ve done. It’s exciting—when you’re opening for larger bands, there’s about five percent of the audience who will arrive early and see our set. It’s like you’re holding people hostage and they don’t want to be there,” he laughs. It’s fun for me to be an antagonist and I’m really good at it. But, when you’re headlining, people are there to see you, and that approach doesn’t work. I’m learning to embrace it. It’s nice when people are singing the words back to you,” he adds. “It’s a good feeling.”