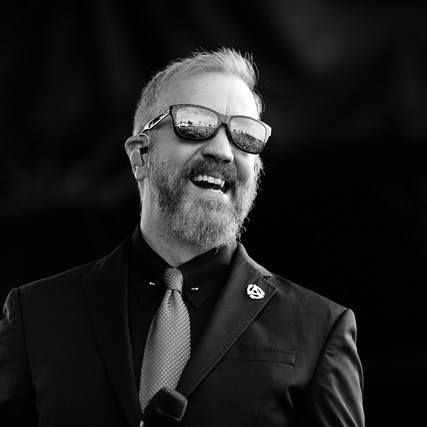 JJ Grey, avid surfer, part-time pecan farmer, and adversary of fire ants everywhere, will bring his legendary fire to Marathon Music Works on Saturday, October 7th. Since the late 1990s, the Florida native and his band, Mofro, have torn up the highways on a consistent basis, spreading their signature style of good-time, funky, blues-infused swamp rock to eager listeners from coast to coast.

With his endearingly familiar southern accent and his unique outlook on life, Grey is a multi-faceted charmer who has wisdom in spades. “I don’t expect anything, I just go with what I see right in front of me,” he says of his time onstage. “I enjoy the electricity off the audience and the band, I just soak it in and feel it. You can even do that with your own heartbeat–if you sit still, you can feel like, and you’re like ‘Wow! What’s making that thing go? How’s it doing that?’ I have no idea why, and I’ve come to the conclusion that I don’t need to know why, I’m just going to enjoy it.”

“The most important thing I’ve learned is that the greatest gift you can give anyone or yourself is just sharing an honest moment with someone,” he continues. “One where you drop all pretense and all expectation and everything, and you just enjoy what’s happening, wherever it is—on stage, in a hotel room looking out the window—whatever and however, just enjoy it. Become aware of the beauty around you. I’m responsible for my own universe, and it’s up to me to stop focusing on everything that’s wrong, as though life is this thing that can be perfected,” Grey adds. “It’s always going to be a mixed bag—things go wrong, they go right. Just enjoy it, because even if things go wrong, there’s always the opportunity to rise above it.”

Grey and company are still riding the wave of acclaim from their 2015 release, Ol’ Glory—and it’s icing on the cake that he makes his music in a refurbished concrete block building he calls “The Egg Room.” “My grandparents raised fryers, and there like 30,000 chickens in each house, a crazy amount of chickens,” he recalls of the family’s fertile egg business. “We housed the eggs in this building between the chicken houses; eventually I gutted it, tore the roof off, and built it all back,” he describes. “I do all my preliminary recording in there.”

While many are intimidated by performing in the Music City, Grey’s philosophy, as noted above, is “enjoy it.” “I love playing Nashville, we always have great crowds there. I guess everybody goes there with different expectations; I don’t personally,” he says. “Our audience there is as into it and ready for the show as anyplace else. I hear people say it’s a tough crowd, that the audiences have seen and done it all. What I find is, especially with the younger bands, they’ll have some record label guys coming out, or a lady who runs a publishing company, they’ll always have these external things going on with the show. None of them industry people really come out to our shows, so it doesn’t really matter,” he laughs. “We just got good ol’ people that come see our shows. I’m not knocking industry people—come one, come all—we just never had to worry about that stuff, big record label people giving a shit. When I was younger, I might have gotten caught up in all that, but now, I’m comfortable with life,” he says. “It is what it is, you just enjoy it.”