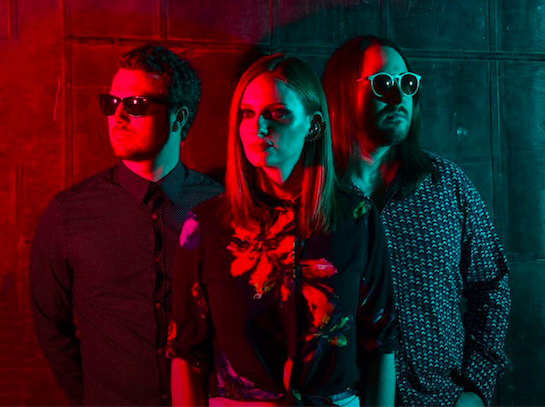 It’s one thing for a band to perform for an audience—performing for an audience as a full band with gear in the cramped quarters at the front of an airplane at 35,000 feet in the air on its way from Nashville to Los Angeles is an entirely different animal altogether—just ask Nashville indie pop outfit The Daybreaks.

The band was one of six chosen across the country by Southwest Airlines as one of their “Artists On The Rise” (see what they did there) to compete for a chance to perform at legendary Colorado venue Red Rocks on June 26th. ““It was a trip!” exclaims vocalist Kaleb Jones of the experience. “It was also super nerve-wracking. We’ve all been doing this for a long time, so we don’t really get nervous anymore, but when you’re trapped in a steel box full of judging eyes, it’s a little different,” he continues. “Of course, we chose to go to L.A., and of all the places where people might be hyper-critical, it would be the flight from Nashville to Los Angeles, goodness gracious.”

In an attempt to stretch their creativity as in-flight entertainment, the band used different instrumentation like an old-school omnichord and a melodica; the bassist even used his electric bass, hooked up to a small, battery-powered amp strapped his hip. “We rehearsed in a box shape taped off on the floor to see if we could cram ourselves and all our gear in that size space,” says vocalist Heather Bond. “I’m dying to go. Even if we don’t win, I might just go anyway and wear a Daybreaks t-shirt,” adds Jones with a laugh.

The Daybreaks are also geared up to release their new album, Find Me At The End Of The World, on June 30th. “We’re throwing a release party at The Back Corner here in Nashville. It’s amazing, it’s really hip,” says Jones. “It’s a very cool atmosphere and vibe,” adds Bond. “There are couches you can lay on while the bands are playing, if you’re feeling so inclined.” “That is literally Heather’s favorite part,” explains Jones. “Not that it sounds good, but that there are couches.”

“It’s going to be a whole experience,” Jones continues of the release celebration. “We’ve got a DJ playing after all the bands perform, we have some local artists who are displaying their visual art, and a graphic artist whose work will be displayed on a screen behind the bands when they play.” “We also have some surprises, some exciting surprises during the show. Anything could happen,” teases Bond. “We want you to come and be moved, in all the ways you can possibly be moved.” Adds Jones, “And join our couch-sitting cult.”

So much excitement for a band whose inception wasn’t ever planned. “Kaleb and I had met at a studio party, and were just writing songs together; we collaborated for a about year before Kaleb took some demos to Bobby, who is also in the band and who produces us, and he suggested we become a band,” recalls Bond. “It happened really organically, as much as that word annoys me sometimes.” “Thats right,” says Jones. “Our band is locally-sourced, gluten-free, artisanal music.”

Stream The Daybreaks’ Live At 35 performance of new single “The Machine”: https://southwest.fm/thedaybreaks/

[Click HERE to vote for The Daybreaks to win Destination: Red Rocks!! The contest ends on June 8th, so don’t delay!]

One thought on “AN EXCLUSIVE INTERVIEW with THE DAYBREAKS”