At the Main Stage on an overcast Saturday, Nashville southern soul revivalist Anderson East jumped straight into his melting sound of soul and kicked off our second day at Shaky Knees with a bang. The band got the crowd moving as East howled through every line, and literally gave me goosebumps with his combination of soul, rock, and country that powered through the festival grounds. East’s shimmering vocals were beautifully support by a dazzling horn section; he represented Nashville very well as he committed himself to the music wholeheartedly, poured out his heart to the eager crowd, and left it all on the stage.

We put our kickstands down and stayed at the Main Stage for Americana duo Shovels & Rope; dressed in matching navy blue jump suits, the husband and wife combo of Cary Ann Hearst and Michael Trent, who make a lot of noise for two people, rocked that stage with utter abandon. Their musicality shines as the two switch between instruments, lead vocals, and harmonies, their music forges full steam ahead like a pile driver, and they never looked back. Combining a folk/blues songwriting style with straight up rock n’ roll, these songs invade your soul and make your heart beat a little faster. They played a flawless set and left an indelible mark on the day.

We made our way to the packed out Piedmont stage to catch The Revivalists, who had the crowd dancing and singing along to every word–The Revivalists put on one hell of a show. Lead singer David Shaw utilized every bit of the stage as he moved from side to side to interact with the crowd. This is a big band that puts out a lot of sound, and every member seemed to have as much fun as everyone in attendance. They capped off their powerhouse roots rock set with a wonderful cover of the classic Beatles tune, “Hey Jude,” and it was one of the most thrilling shows of the day. 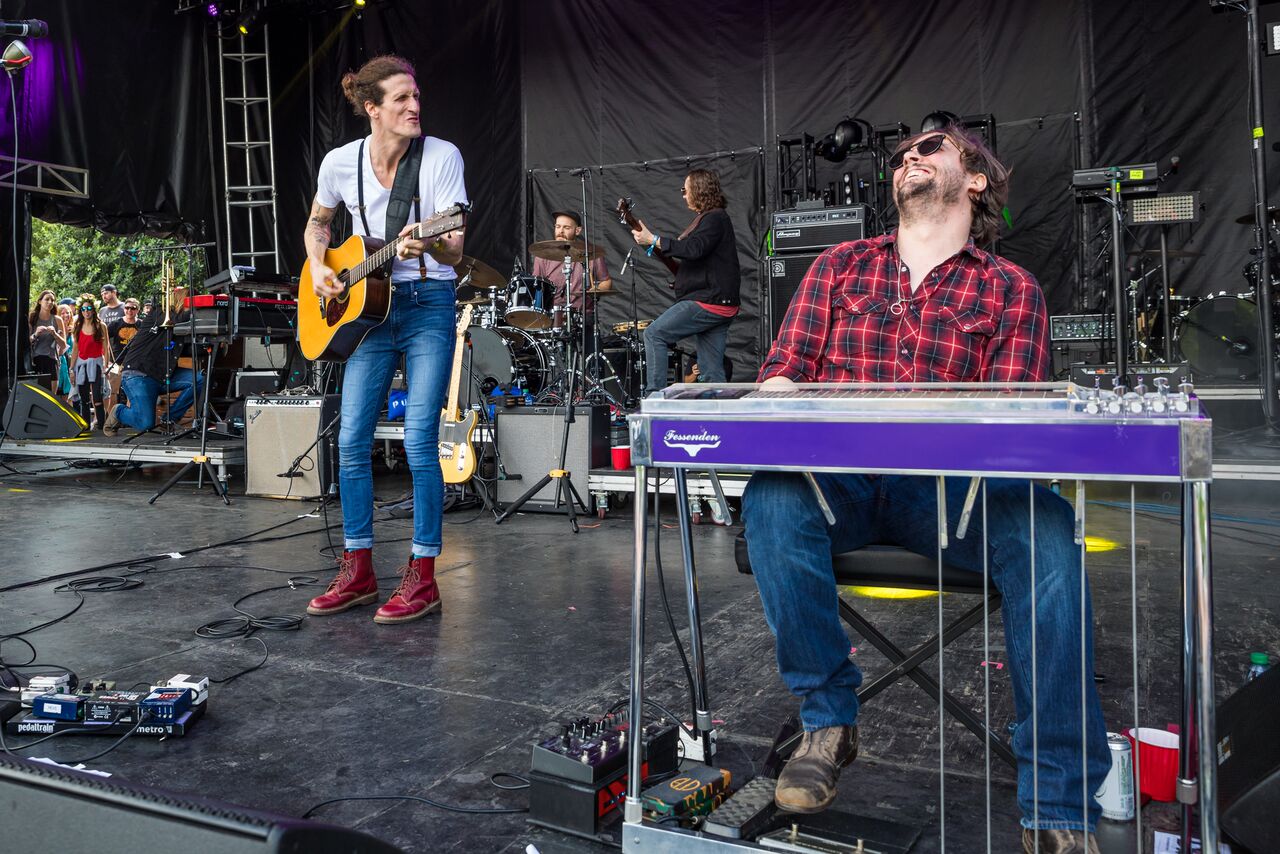 Next on the Piedmont stage was Philadelphia’s seasoned psych-rockers Dr. Dog, and we scrambled and negotiated our way to the front of the crowd to see them in full force. Dr. Dog has accumulated quite the catalogue over the years; their set was filled with old classics like “Shadow People,” “Lonesome,” and “Bring My Baby Back.” The band also played new songs from of their latest release, Abandoned Mansion, one of my favorite records of the year so far. Dr. Dog are champions of the road, and it was apparent in their carefully-honed chemistry and charisma on stage. The wonderful harmonies and sonic textures shone with each new song, and the crowd sang along to every word. Dr. Dog put on an amazing show, my favorite set of the entire festival.

Nashville jam rock favorites Moon Taxi took the stage and owned the crowd in short order with their hair-parting, mind-blowing, body-shaking brand of rock n’ roll filled the Atlanta air—this band was made for festival atmospheres, totally in their element. With multiple stellar releases under their proverbial belt, their whole set was filled with crowd favorites. Their flawless execution of pristine songs combined with a high energy performance is hard to beat. Oversize beach balls– a Moon Taxi live show staple—made an appearance in Atlanta, and put the whole thing right over the top.

We sauntered back over to the Main stage to catch Nick Murphy, which is Australian Chet Faker’s new moniker, and was very different than the Chet Faker to which we have grown accumstomed. The new pop sound was filled with synthesizers, haunting vocals, and a killer light show. Nick Murphy definitely claimed their spot in the electro-pop world, their electrifying show definitely won over some new fans, and proved they are a new force to be reckoned with.

Our Saturday ended with electro-pop darlings the xx who made their Shaky Knees show their first in Atlanta in five years. Their return was met with much anticipation and energy from the crowd, and they did not disappoint. The production was incredible as revolving mirrors filled the open space of the massive stage, and reflected a captivatingly enchanting light show. Each song was performed with perfection–their stupendous harmonies and thrilling melodies were a great way to end the day.