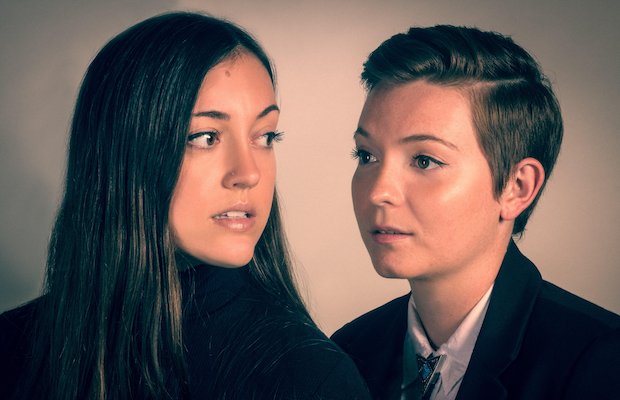 “I was like, hey Kaylee, wanna be in my band?” Haley Grant remembers of asking her partner, Kaylee Jasperson, to embark on a musical adventure called The Harmaleighs—on the condition that Jasperson sing harmonies. “I was like, I am a bass player, that is what I do. I do not sing,”  she laughs. “Singing onstage felt terrifying. But, I agreed to talk to about it,” Jasperson adds. “Now she sings like buttah,” gushes Grant.

It’s true, this pair makes that spine-tingling, ethereally potent kind of music that gets embedded in the brain for the long haul, but that never wears out its welcome. Now, the Nashville-based duo is preparing to release a new EP, Hiraeth, on May 5th, which was inspired by a life-altering undertaking in the form of an eight month long tour. “We got rid of our apartment, we stored our belongings. We bought a huge van, took out the middle seats, put a mattress in it, and slept in it for four months, until we bought a camper, like a tiny house to live in for the rest of our lives,” says Jasperson. “We picked it up in Colorado and headed to Moab, Utah for a show. It took me three hours to figure out how to get it unhooked from the truck, and in that moment, we regretted it, and we sold it,” she laughs. They crisscrossed the country, sleeping in Wal-Mart parking lots and enduring some scary moments at truck stops.  “Being on the road for four months is amazing. Being on the road for eight months is horrible.” Grant admits. “We got really burned out.”

After the tour, they didn’t play or make any music for a year. “April 2016 was the first time I picked up my guitar and felt like writing again. The songs just started pouring out.” recalls Grant. “This whole record is inspired by that time on the road and our feelings about it,” adds Jasperson. For example, tongue-in-cheek opener “Lady Brain” was inspired by the rampant chauvinism they experience on the road. “Being a girl band, you get that shit all the time,” admits Grant. “There was a time when we were touring with a third person, who was a guy, and we were at a biker bar in Tulsa. When we got there, we tried to talk to the sound guy—I’m usually the one who talks to the sound people and tells them what we need—and I tried to talk to him and he wouldn’t acknowledge either of us,” Jaspersen relays.”Then he went up to Kevin, the guy we had brought on tour, and started asking him what we needed for sound, who to make the check out to, and Kevin had no idea. We had to relay all the information for the sound guy through Kevin. Then, after the show, we went to the bar to grab a drink, and the bartender said, ‘wow, you guys are great for girls,’” she adds. “That  particular little nugget informed the song.”

Knowing they wanted to go in a different direction with their sound and style, Grant and Jasperson reached out to Nashville’s Paul Moak to produce Hiraeth. “He’s incredible,” says Grant. “We recorded most of the tracks live, and he sat in the room with us while we were recording. There was a certain vibe and it was working.” “He brought the vibe,” adds Jesperson.

“When we were on tour, I found this word online,’hiraeth,’ which is a Welsh word meaning ‘to have a longing for a home that never existed, or a home that once existed that you can no longer return to.’ It was literally how we felt, being uprooted,” Jasperson continues. “Even when we would come back to Nashville, two months or so, it didn’t feel like home. We were staying in the trailer park at the fairgrounds, it was so weird.” Fortunately for us, The Harmaleighs are back in Nashville, at least for now, but no matter where they live, they’re always at home whenever and wherever they share their beautiful music.

One thought on “AN EXCLUSIVE INTERVIEW with THE HARMALEIGHS”