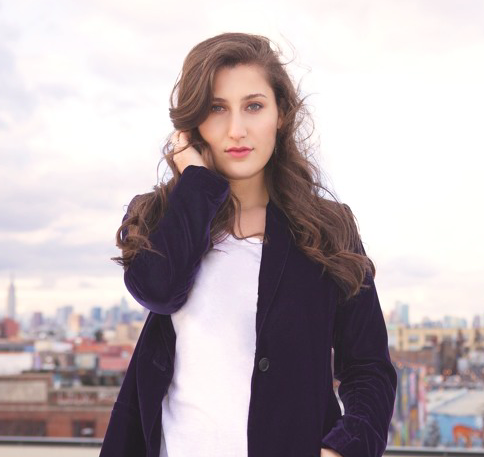 New York City-based pop star-on-the-rise Sarah Solovay began making music at the ripe old age of six. That’s right, while most of us were learning to add and subtract, Solovay had embraced her passion and was already working towards her life’s goal. When she was 13, she began participating in open mic nights in clubs around the city, even though she was too young to get into the venues herself. “The bouncers would draw these humongous black X’s on my hands in Sharpie, as if someone was going to serve me,” she laughs. “I looked so young. I was two feet shorter than everyone in there, it was pretty absurd in hindsight, but also pretty amazing for young Sarah.”

Those open mic nights turned into longer sets, and by age 14, Solovay was recording, gigging, and building up a buzz, which culminated in a full-fledged career for the then-high schooler. Though she was young, she wrote about love—or what she thought love would be. “My whole life, I’ve been obsessed with relationships; I was the little girl who loved romance plot lines and storybook romances,” she recalls. “Obviously, at nine years old, I’d never been in a serious relationship, but I imagined what that would be like—to fall in love, to have your heart broken. I drew on other things in my life to inform what I imagined those experiences would be like, but they were all fantasy songs for a long time.” After high school, Solovay went to college, putting the brakes on her career as she knew it, though confident that it was the right decision. “I didn’t want to put it off. I knew that becoming a full, adult, person, having those extra years of growing up, would make a big difference in what I do creatively and become the artist I wanted to be,” she explains. Now, finished with higher education, Solovay is recording and releasing new music. “This phase of career is so different; the daydreams and fantasy turned into real life experiences,” she says. “It makes a huge difference in terms of connecting and sharing what’s deeply personal.”

“The cool thing about the songs I’m performing now are ones I’ve written in the last five years,” she continues. “Some of them have taken on a new meaning for me over time,” she reveals, naming her recent single “Rough Draft” as a prime example. “When I wrote it, I was daring someone to love me even though I wasn’t perfect and I was still working myself,” she adds. “Then, the more I sang it and the more time I spent with it, the more it felt like it was me telling myself ‘love yourself, even though you’re not perfect, and don’t be afraid to put yourself out there, dream big, and pursue things.’” Her brand new song, “Trick Me,” also marks a pivotal moment. “I wrote it a little over a year ago; it’s about going for the guy who’s really not good for you, and you know it from the get-go, but there are things that are exciting about that experience, and enjoying it before it all goes to hell,” she laughs. “Recording it was a turning point in figuring out my new sound—the last time I’d recorded was about five years ago, and my vision and influences had changed. When I had this one figured out, all the others came a little easier.”

With her music, Solovay hopes to inspire others to thoughtfully consider relationships and human interaction, and understand how those relationships affect how we see ourselves and how we grow and change as people. “Maybe hearing what I’ve gone through will help some people feel a little less crazy about the thoughts they’ve had or the things they’re going through. Lord knows, I rely on music for that,” she laughs.”I just want to lift people’s spirits.”