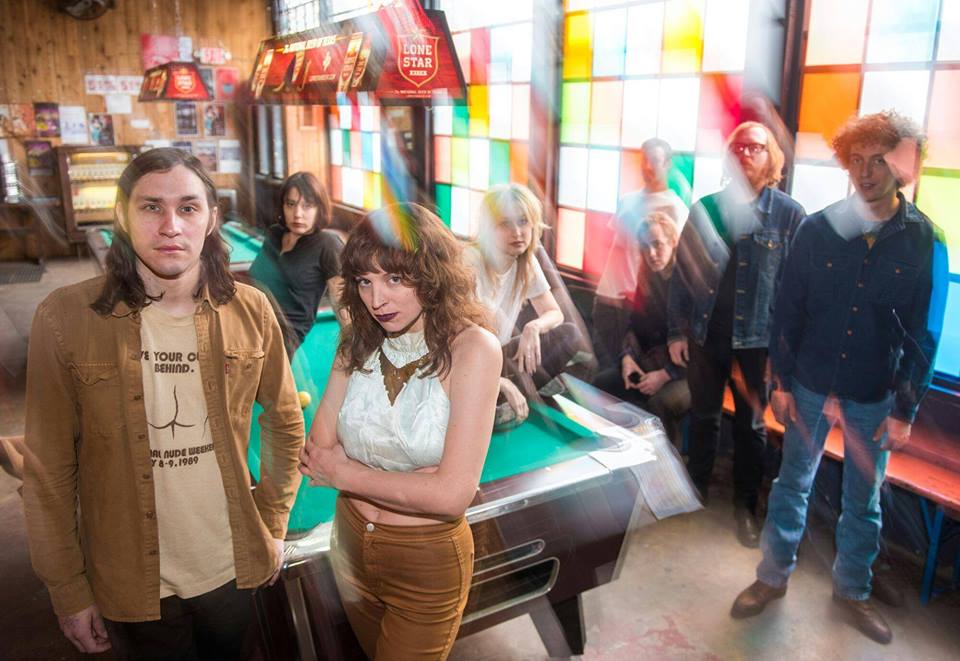 David Bowie. Gary Glitter. Iggy Pop. These are prominent names associated with 1970s-era glam rock, a hard-hitting collision of art and sound; the glam rock glory days didn’t last a long time, but its influence still rings throughout the modern musical landscape. Meet Sweet Spirit, the Austin-based collective whose raucous energy and all-around badassery could very well usher in a new era of glam, with a unique 21st century spin.

Originally a solo project, Sweet Spirit is a partnership between longtime musical collaborators Sabrina Ellis and Andrew Cashen, who front punk band A Giant Dog. “Somewhere in there, I started another band called Bobby Jealousy with a man that I was married to,” recalls Ellis. “We had a lot of fun for a couple of years, but then it imploded, and unfortunately, so did the marriage. I was young and overworking myself. I was also very principled against canceling shows, so I thought, ‘I have all these shows on the books and I don’t have this band anymore. I’m going to start a new one.’” Ellis and Cashen had been writing songs together for Ellis’ solo project, Sweet Spirit, and armed with a cache of songs, Ellis got a group together to jam. “Andrew grabbed a guitar and played with us at that practice and at our show the next day,” she says. “We became busy almost immediately, playing three or four times a week.”

Sweet Spirit was conceived with country music in mind, but Ellis and Cashen quickly discovered it wasn’t for them. “Andrew and I have always been into glam rock, though it was a 70s flash-in-the-pan genre. There were so many cool bands like The Sparks, and Gary Glitter, and Slade,” gushes Ellis, who admits that the pair have too much energy for country music. “When we play a show, we aren’t content to just go through the motions. After every show, we look like a wreck, drenched in sweat. Maybe we go off pitch a bit because we’re screaming, we’re very excitable,” she adds. “That’s the glam element, you could probably transplant us into the 70s and we’d fit into that manic energy that was in the scene back then.”

The band released a new album, Saint Mojo, on April 7th via Nine Mile Records, bursting with autobiographical songs written during the whirlwind of Sweet Spirit’s first two years.  “I feel it’s a stretch and an effort to step outside oneself and write about something else. I feel like it’s egocentric to write about what’s happening to you, but it’s also a sacrifice to write about your own blood, your own hormones, your own private thoughts for other people’s sick entertainment,” Ellis laughs. “We were having a really sexy, fun time starting a new band together, being surrounded by people who wanted to party with us constantly, but at the same time, I was the most serious I’d ever been and it was the most responsibility I’d ever taken on,” she continues. “Artistically, this album stretched us and we grew together as people. We went through a lot together, and that’s reflected in the album. We went all out, it was intense. We made the album right after SXSW last year, in the hills of Austin, with producer Steve Berlin. Working with him was amazing, and in a way, he is St. Mojo, the sage that brought together this sound.”

Sweet Spirit has taken its rowdy show on the road–as Ellis describes “real world trailer trash in a van”–who will crisscross this great land of ours for the next seven months. The tour will bring them to The East Room in Nashville on Thursday, April 20th, where the brilliance of Sweet Spirit and their support of St. Mojo will be on full display. “I felt nervous all year about shooting for the moon and waiting to see if people like it. I’m calm and at peace with it now,” she laughs. “It’s my baby, and I don’t care how ugly it is.”