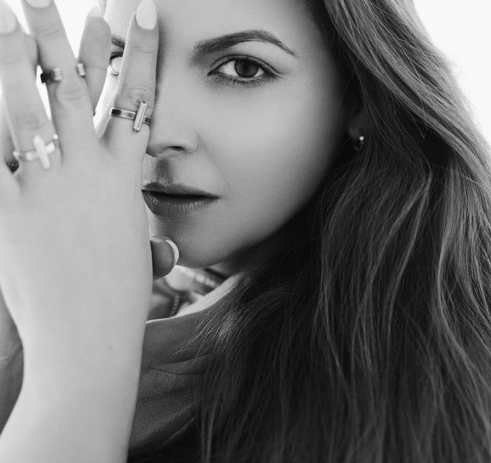 Adaline, Canadian pop star-in-the-making, is the daughter of a preacher man. Her father’s work kept the family on the move, as they never stayed in one place longer than five years at a time. “I’ve lived in dozens of cities. Moving for me is second nature, it’s almost a bad habit at this point because I get a five year itch to go somewhere new. I’m fearless when it comes to that stuff,” she explains. Her upbringing also shielded her from the wide world of secular music. “I work a lot on researching and getting to know music that most people grew up around, I didn’t grow up in a family that listened to Led Zeppelin or anything,” she laughs. I grew up really sheltered, so my knowledge, stylistically, was limited. It’s been interesting to explore genres and styles. I discovered I was drawn to a darker kind of sound.”

That darker sound has manifested itself as moody, anthemic, alternative pop. “I’m drawn to sensual sounds and vibes. I grew up in a really shiny, happy environment with all major chords,” she laughs. “I wanted to explore something different.” Now, the singer is preparing to release her new full-length album, Aquatic, set for release on June 2nd. “I seem to only feel inspired on the water,” she explains of the album’s theme. “Water has a fascinating dichotomy—it’s life-giving, but it’s also dangerous. I was on the water when I wrote the lyrics for the album; I noticed that the songs had a lot of water imagery, and I realized the similarities between love and the water. Both are so beautiful, and both can be so dangerous. The movement of the water even has that push-pull quality, like how we are with other people in relationships,” she continues. “I just ran with it.”

Not only is the sound inspired by darkness, Adaline lyrically explores the darker side of love and relationships, and a perpetual search for genuine, human connection. “We’re in a crisis,” she says. “We have so much more opportunity to connect with all the digital formats, but it only alienates us more. Social media is a huge topic of conversation, and we’ve learned that its side-effects are damaging. People withdraw and posture. We stop having actual connections with others, and the connections that do happen are staged,” she laments. “We’re afraid to connect and we’re able to hide, it’s crazy. We have to be brave enough to love people fearlessly.”

Adaline has vowed to practice what she sings. “Being a songwriter can be an alienating experience; I went through a couple of really lonely years, and I don’t think anyone knew. It’s harder to hide in person,” she adds. I’ve made a commitment to write with others, to share ideas, and gain others’ perspectives,” she reveals. “This is how I reflect on life and the world, and now more than ever it’s important for artists to send out statement pieces on how we can improve, and look at things deeply and more closely,” she says. “It’s our responsibility.”