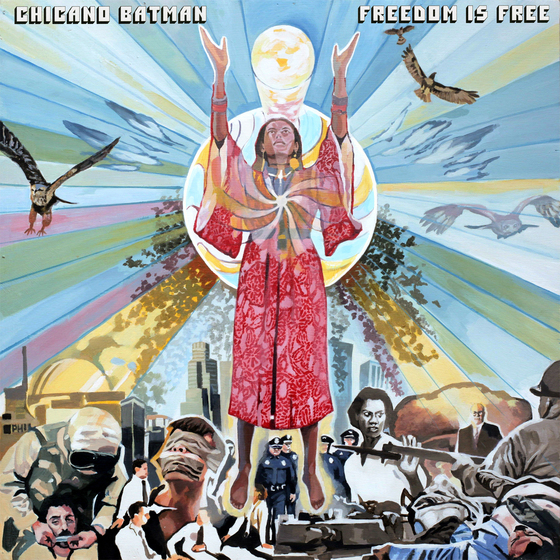 Los Angeles-based coolest of the cool soul outfit Chicano Batman has put their collective foot down, and made a bold lyrical and musical statement with their new album, Freedom is Free, set for release on March 3rd via ATO Records. Known for their unique ability to blend Latin American, psychedelic, and soul music into a mystic brew of sonic magnetism, the band joined forces with soul veteran Leon Michels, taking their sound in a more R&B-focused direction. The pairing has carried the band’s sound to its fullest potential yet, and has captured the energy of the band’s live sound more than previous releases. Chicano Batman has arrived and Freedom is Free will be a career landmark for this talented group that oozes charisma and creativity.

Psychedelic guitar riffs and the celestial harmonies of an angelic choir kick off the festivities in opener “Passed You By.” As the verse begins, sonic elements are continually introduced with stacked harmonies, driving bass and drums, and a wave of tones from the guitar and organ, like a swirling vortex that draws you deeper into the album. Lead single “Friendship (Is a Small Boat in a Storm)” has an especially skin-tingling groove of fluid sonic and rhythmic movement, like a boat being tossed in the sea—one that does not capsize but smoothly takes on each wave as it comes. The song explores the pains of friendship and loss of trust; there is no issue resolution here, and just like in life, sometimes, there is none. The title track tackles the issues of our country’s marginalized population and society in the wake of recent events, supported by a driver’s seat bass groove. The message is simple–freedom is free. While some may balk at its political bent, this song is a necessity, delivered in a medium like music, which has no religious, ethnic, or preconceived stereotypes.

Album standout and final track, “Area C,” shakes things up, offering a change of pace and direction, with acoustic guitar in the forefront of this instrumental gem; as the last song on the album, you might expect the band to make one last statement, to pound one last stake in the ground, but insterad, Chicano Batman leaves us in a place of rest and resurgence, and makes us feel like we are not alone in this life.

Freedom is Free is a masterpiece of exploration, where heart and soul meet in a flawless blend of sonic peace. The album makes a statement about people and culture with challenges to the societal stigmas we accept and believe, but it also pays tribute to our roots–music that has come out of the diverse melting pot of the country in which we live. This record promotes unity and represents how we should love and cherish the good in each and every person rather than marginalizing those who are different from ourselves—and what better way to do that than through the unifying and healing powers of music? Chicano Batman is doing something remarkable and Freedom is Free is a timely and important record that the world needs to hear.

[This review was crafted by the multi-talented James Farley; you can follow him at jamesfarleymusic.wordpress.com.]