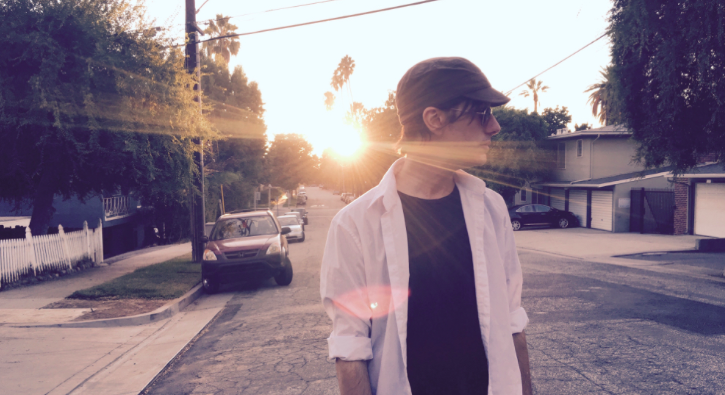 “As a kid, music was hitting me really hard, and it caused me to go to an emotionally invested place. Songs were almost debilitating to me as a kid, I assumed it was the same for everyone else,” recalls alt-rocker Louis Schefano, who will release Opposite Side Of The World, his solo debut, on February 17th. “I felt like it opened another dimension. I knew I had to teach myself how to play guitar so I could tap into it. I never questioned that I could, I just had to find a way.”

Schefano initially found success behind a drum kit; I had plans to be the world’s greatest drummer,” he laughs. “My first band was Remy Zero; we got signed to Capitol Records off of a little cassette we sent them. My first foray into the music world started with a bang,” he says. “Somewhere along the way, I developed an interest in songwriting. Maria Taylor, from Azure Ray, and I were in a band together, and I started writing songs then. My paths split, I was drumming professionally, but began recording a solo record under the moniker Regia.”

“I’ll start playing, and words seem to just fall out, and it always surprises me, they just come out without me having to think about it.” he continues. “My songs come from a well of sadness—I’m kind of plagued by it, I feel like it’s always the starting point. It’s not darkness, it’s a beautiful sadness. I’ve tried to fight it, but I realized it’s okay to be sad.” While assisting Taylor in the recording process, he played songs for her husband and record label partner Ryan Dwyer. “When I played ‘Come To Think’ for him, he told me he had a vision for my album, and that’s where this started. I kind of feel like this album is all Ryan and Maria’s doing, I’m just the talent,” Schefano laughs. “I usually shy away from the music business and self-promotion. I gave up trying to understand the current state of the music industry. Ryan loves the music, he has vision, and he knows how to steer it. This is the first time I’ve ever felt completely comfortable in this kind of situation.”

Recorded everywhere from rehearsal spaces to his kitchen table, Schefano was free to explore and invent with Opposite Side Of The World, which will be released on Taylor and Dwyer’s label Flower Moon Records. The 10-song stunner channels his influences and love of 60s-style rock n’ roll; “I grew up with that classic 60s sound, that’s all I listened to. I don’t know what would have happened had I never heard The Beatles or had no knowledge of Abbey Road Studios. I have an eternal devotion to George Martin, who produced their albums,” he reveals. “I don’t mean to single them out, but when you think of the 60s, you think of The Beatles.”

With his album in the can and another on the way, Schefano will experience another first—touring his own songs. “I’ve never done it before, and I can’t believe my first time touring my songs is with Maria in Europe,” he adds. “I’m blown away.”