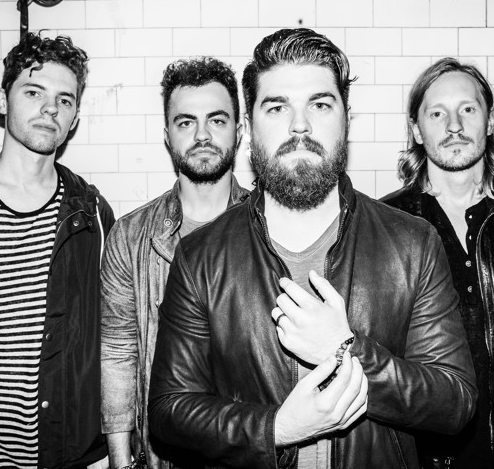 We were first smitten with Knox Hamilton, our favorite dance pop outfit and the pride of Little Rock, Arkansas, who reeled us in with their infectiously synth-y sound, all the way back in 2014; since then, we have thoroughly enjoyed keeping up with their adventures, relishing their live shows, devouring the occasional single or EP release, proudly sporting our KH t-shirts around town, and cheering them on as they made their first round of major festival appearances–but THIS, beloved readers, THIS is the moment that we have been anxiously awaiting—Knox Hamilton will release their debut full-length album, The Heights, on March 10th via Prospect Park Records. Have mercy.

Naturally, we were beside ourselves with excitement, and were overjoyed to talk to frontman Boots Copeland about all the things. “We got done with the record about a year ago; we know these things take time, but we’re impatient!” laughs Boots. “As a joke, we say we have two albums within an album; we have an album we did with a buddy of ours from Capitol Records in El Paso, Texas—it’s heavier rock, more guitar-driven, and then we have the more synth-pop stuff we did in L.A.,” he continues. “So we have a dichotomy for our first album, we’ll call it our experimental album. You’ll be able to tell the difference, it’s not a homogenous every-song-sounds the same kind of album. I hope it keeps the listeners on their toes a little bit.”

At 13 songs strong, The Heights is a blend of storytelling and real life experiences, of which Knox Hamilton has had their fair share. In fact, since we last spoke, lyricist Boots has become a father to son Cub. “I haven’t written my ‘With Arms Wide Open’ yet about Cub,” jokes Boots. “He’s definitely inspiring in a ‘makes-life-hectic’ kind of way. Life’s different, but it’s a good kind of different. With Knox Hamilton, it’s always going to be life experience themes mixed in with a short story here and there, and ‘Washed Up Together’ is absolutely a short story,” he says of the album’s hit lead single. “It’s fictional of course, I’ve never been thrown overboard or cast away on the open seas,” he laughs. “It’s my Hemingway novel, only less boring. My wife is my muse, and I write most of the lyrics, so there are a plenty of pop love songs—that angle is very alive and well with Knox Hamilton,” he adds. “Paul McCartney sang ‘You’d think that people would have had enough of silly love songs,’ but they just kind of write themselves.”

“Knox Hamilton is a positive force,” Boots continues. “You can listen to dark stuff by any band you prefer—if you want to get melancholy, you can turn on Radiohead or whoever your favorite band is, but Knox Hamilton is there to lift you up.” We’ll take it.

More about the band:

PREVIEW: KNOX HAMILTON at THE MERCY LOUNGE on 1/8/15