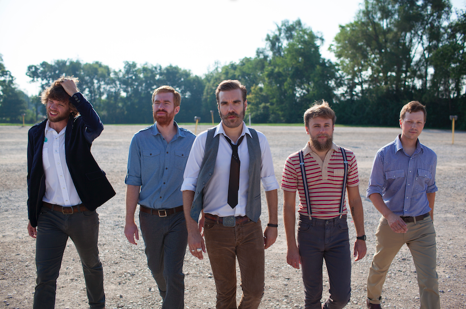 This past year, Scott Terry, frontman of heartland rock band Red Wanting Blue, had some late-night conversations with his Grammy-nominated music-making friend Will Hoge on The Rock Boat, an annual maritime music festival, about making a record together. “We’d just gotten out of our contract with Fanatic Records and we we free agents. Will has a label through Thirty Tigers, so decided to break the wheel,” explains Terry. “We’d historically always done the same thing, on the road for nine months of the year, using the small blips of time we had here and there to make a record. We wanted to change that.”

The band was also experiencing growing pains; three members had gotten married in the last year and half, and there had been a lot of change. “We were at a strange crossroads of being off of a label and determining that we didn’t want to do things the way we’d done them before,” he continues. “It made sense to change how we were doing things, break old habits, and turn the corner musically.” So, the perennial road dogs took a whole year off from touring, and made a Will Hoge-produced record they hope to release in early 2017. In the midst of the new project, Terry’s wife brought something significant to his attention—Red Wanting Blue was about to turn 20, and they needed to celebrate.

“We decided to do a mini-tour and play at some of our original stomping grounds that are sentimental to our band,” says Terry. “My wife directs music videos, she’s very talented; she spearheaded a project to film it. We’d made a live album about 10 years ago, an acoustic/electric hybrid, and it was it’s own interesting thing,” he adds. This project, called RWB20: Live at Lincoln Theater, was going to be vastly different. “Even though we’ve been running around for 20 years and we’ve been playing together since we were kids, we’ve never been more known than we are now,” Terry explains. “It’s been a very slow grassroots percolation for our band; it feels like it’s taken us 20 years to really get going and moving to another level.”

To reflect that, the film begins with a performance of a song from their forthcoming record. The band then embarks on a sonic journey chronologically back to Velveteen, their first album, released in 1996. “We have this new record coming out next year, and we’re more proud of it than anything we’ve ever done. We wanted the live film to be about where the band’s been, but more importantly, where we’re going,” says Terry. “We’re a live band, that’s how we’ve made our reputation; it was kismet for a live band to make a live album for new people who don’t know who we are. It was exciting to capture the spirit in a real way.”

There are few bands who get to celebrate a 20th anniversary, and Terry says the band shows no signs of slowing. “You see all kinds of bands; there are bands out there who run it like a business, and maybe that works for them. There are bands that are run like a family, and that’s what works for me,” he reveals. “We’ve always looked at ourselves as the Griswolds of rock n’ roll. We’re not that cool. And we will drive hundreds of miles out of our way through Arizona to go see the southern rim of the Grand Canyon, or go through Cabazon, California to look for the dinosaurs from Pee Wee’s Big Adventure, or go to Seaside, Oregon to find the rocks from Goonies,” he adds with a laugh. “We became a family. No one can say we weren’t determined.”

View the film trailer at www.redwantingblue.com