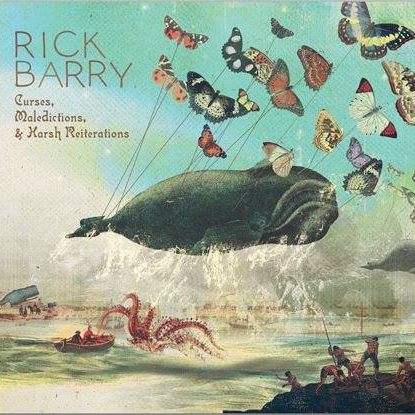 “I’m Rick Barry, I’m on the cusp of Scorpio and Sagittarius, not that that matters,” laughs Asbury Park, New Jersey-based folk singer Rick Barry, who is on tour supporting the release of his latest album, Curses, Maledictions & Harsh Reiterations.

Folk wasn’t always the focus for Barry, who grew up idolizing a fellow Asbury Park music-maker. “One of my first memories is playing ‘Born In The U.S.A.’ on a toy guitar and pretending to be Bruce Springsteen. I wanted to be a rock star, I wanted everyone to look at me and be as cool as I was. Then I started writing after I head Dylan for the first time, my main motivation was to get girls, of course. I was pretty terrible at sports, and I needed something, and music would have to do the trick,” he admits with a chuckle. “Then, of all the things I tried to do, it became the thing I did best.”

“Probably every songwriter has that moment early on, where they realize deep down they may never be like their idols, but it’s worth it to spend a lifetime trying. When I really started writing, my first record was terrible, it was me still trying to be a rock star and trying to get chicks, and trying to be ‘cool’. After that, I went through a break-up, packed up my shit, went out west, and wrote the most honest songs I’d ever written,” he continues of his transition from rock to folk music. “I felt something, and I stuck with it, making music that moves me.”

The songs on Curses, Maledictions & Harsh Reiterations feature Barry’s whimsical tenderness and observations on life, self-doubt, and mortality. “I have morbid moments, certainly, underlying anxiety in realizing that one day you and everyone you know will be dead, and wondering if everything is pointless. Drinking helps,” laughs. “I feel like I’m a pretty upbeat guy though.” Barry enlisted the help of friends like Nicole Atkins to provide backing vocals, and legendary producer and milt-instrumentalist Larry Campbell to lend his multitude of talents to the project. “If anything makes this record unique, it’s got to be Larry Campbell. He would come in, listen to a song once, and lay down a brilliant mandolin part, then go back and play fiddle, then go back and play pedal steel,” he recalls. “It was great.”

Barry will play with a full band at The Basement in Nashville, tonight, with local rockers and friends Them Vibes— somewhat of an interesting contrast in style. “They asked me if I wanted to play first or second,” he says. “I was like, ‘Uh, first. There’s no way I’m going on after you guys.”