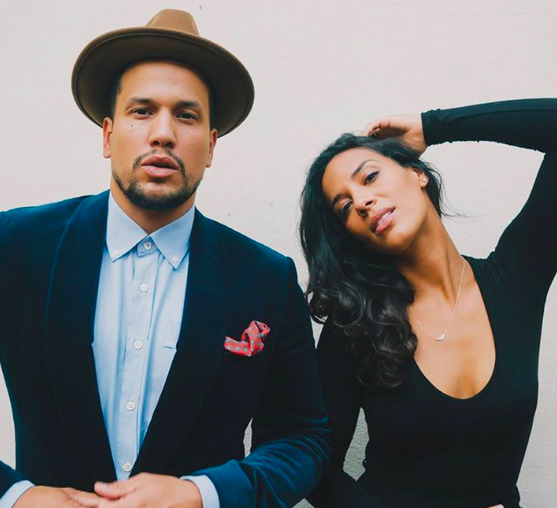 “We’re on our way to soundcheck in the minivan with the baby in the back. You may hear some high-pitched squeals. It could either be Joaquin or Abner,” laughs Amanda Sudano Ramirez, who, along with husband Abner Ramirez, make up endearing pop duo JOHNNYSWIM. The pair recently released their latest record, Georgica Pond, featuring their most vulnerable and intensely honest songwriting to date.

“This album is really personal,” explains Amanda. “We recorded it in what we call ‘the birthing suite’, the room where I gave birth to our son. We wanted to have the freedom to record it as we were feeling things, and not be tied down to a schedule at a studio. We decided to take our time and do it at home; a lot of times you can hear our son Joaquin in the background saying ‘Mama!’ or laughing. Being able to write and record in our comfort zone allowed it to be even more intimate.”

That increased intimacy is perfectly captured on Georgica Pond, as they sing of making marriage work, the loss of Abner’s father, the passing of Amanda’s mother, Donna Summer,  processing grief and pain, and how adding a baby to the mix has completely changed the way they make music. “The craziest thing about becoming a father, to me, is having pride for someone without that person ever doing a thing. The moment Joaquin was born, I was proud of him,” explains Abner. “There’s a heightened level of awareness about the fragility of life, and also the beauty of life. As writers, our duty is to feel; we capture moments and feelings and reproduce them in our songs. The best thing that can happen to an artist is to learn to feel more, and that’s what happened to us when Joaquin came. We feel love like we’ve never felt before, it’s enhanced our capacity to create.”

Joaquin makes a guest appearance or two, and specifically inspired several of the album’s songs, including the title track, about a seaside family vacation spot. “My parents bought land there with plans to build a house where their kids and grandkids could gather. When my mom died, my father thought about selling it, but we convinced him to wait,” recalls Amanda. “We took Joaquin there after he was born, and it began as a lullaby to him. It’s such a personal song, about my child, my mom, and my life.”

“It really is what the whole record is about—loss, love, and how those things make life special and real,” she continues. “It shows you what to fight for. I fight for things because of my family, for my dreams of what my child can be, and what I hope I can be for him. The songs are about giving yourself permission to hurt and to feel—the record encompasses all these things that have been important to us for the last couple of years.”

JOHNNYSWIM is currently on a nationwide tour, which will bring the Los Angeles-based couple to The Ryman Auditorium on Wednesday, November 9th. “Nashville will always be home,” Abner declares of the Music City. “I used to valet at The Palm, across the street from The Ryman, and I remember working during concerts and daydreaming that those tour buses would be mine one day and that it would be my concert that was sold out there. I also remember frequently telling myself not to get my hopes up. Last year, we sold out The Ryman for the first time. I woke up on the tour bus when we got there, got out, walked across the street, and it all came back to me—I was completely moved by the fact that my dreams had finally become a reality. How much would I have missed if I’d given in to that voice that told me not to dream too big? It made we want to dream even bigger,” he adds. “There are still dreams to be dreamed.”