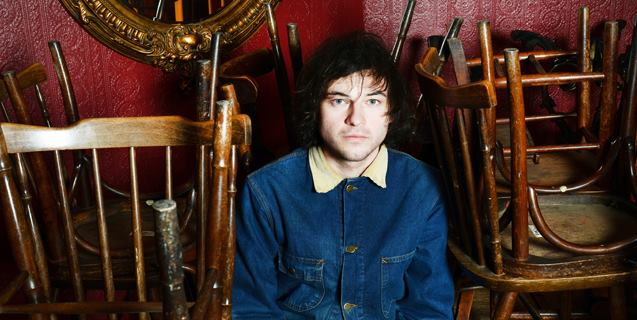 Chicago-based alt-folk artist Ryley Walker is currently on tour supporting his newest album, Golden Sings That Have Been Sung, out last month via Dead Oceans; the tour brings him to Nashville on Thursday, September 15th. Right away, I knew we were going to have a fun chat:

He: “I hope you don’t mind if I eat some Asian coleslaw while I talk to you.”

He: “Actually, it’s got too much vinegar in it. I need to add some pine nuts to it or something to make it taste better.”

Me: “Are you a culinary expert?”

He: “Not at all. You can tell because I put pine nuts in my cole slaw.”

The new album’s tracks were written on the road last year, and Walker had a chance to road-test them before heading to the studio. “We got to improvise on some crazy ideas,” he recalls. “It was really fun.”  The end result has been called “the sound of Chicago”; for those of us who don’’t live there, what exactly does that mean? “We’re in the middle of the country, and there are influences coming from all sides,” explains Walker. “We have southern gospel music, country music, hip hop, everything meets here in the middle. It’s like jazz music with a groove, it’s a melting pot.”

As a youngster, Walker, who loved all kinds of music, became immersed in the punk scene; “I messed around when I was a teenager, and went on tour with a punk band so I could get free beer and meet girls,” he says with a laugh. “I quit college to tour, began to take music more seriously, and now it sustains me—and at this point, I’m completely unemployable if I tried to go any other route, God help me if I had to make a resume right now.”

Now, Walker’s style fits into the folk area, and that’s just fine with him. “I was into punk, but I liked hip hop, I liked everything. I think folk is what comes naturally to me, even as a kid, it resonated with me. I like pizza, but I also like tacos, and the beauty is, I can enjoy them both, I don’t have to pick just one to eat for my entire life,” he declares. “I guess it’s like picking out a wedding dress, and you find ‘the one’…I don’t pick out wedding dresses, but I assume it’s similar.”

As for his travels, Walker is excited to come to our neck of the woods. “I love the American South, it’s my favorite part of the country,” he reveals. “Once I get through nine hours of cornfield bullshit, I’m like ‘Ahhhhh, the motherland.’ It’s going to be a big night of music in Nashville.”