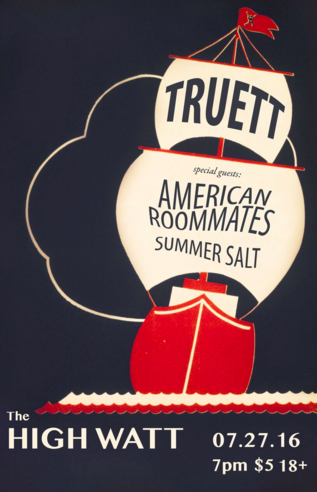 While it may seem that he sprung from nowhere, TRUETT has, in fact, been steadily building a following in the southeast for many years, and if you’re a regular around here (and if you aren’t, you really should be), you’ve met TRUETT several times already–but just in case, here’s a recap:

Eo8 had the pleasure of premiering TRUETT’s debut single, “Be Mine” a while back; the single was released on his new label home, Ron Pope’s Brooklyn Basement Records. “Be Mine” was penned in Nashville with Pope, his mentor, and later recorded in New York City at Flux Studios where it was engineered by Grammy award winner, Ted Young (Rolling Stones, Kurt Vile, Israel Nash).

When we spoke with Ron Pope earlier this year, he said this of his protégé: “I’ve known TRUETT since he was a little kid, we’re from the same hometown.  I’ve known him since he was a 12 year old blues prodigy ripping Stevie Ray Vaughn.  I’ve mentored him for a long time, and I thought I could help him make the kind of record that could showcase what is so extraordinary about him.  He has unbelievably visceral energy that causes a reaction in people watching him perform, pure, raw energy.”

Yours truly witnessed this energy in February, when TRUETT provided opening support for Pope in Nashville–his guitar-shredding prowess was on full display, and I was blown away. Since then, he’s traveled the world with Ron Pope + The Nighthawks, played his first showcases at this year’s SXSW, and finished writing the songs for his forthcoming  full-length.   Come see him at The High Watt, it’s a show not to be missed. Summer Salt and American Roommates will be providing opening support, and tickets are only $5!