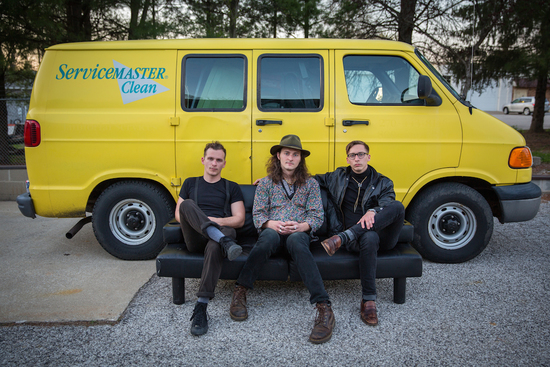 “The stars just kind of aligned for us,” says Harpooner co-founder Max Mullen, who met bandmates Scott Schmadeke and Josh Morrow while attending college in Bloomington, Indiana. “We were all playing basement shows together in different bands, started hanging out almost every weekend, and Harpooner was born,” adds Schmadeke. A desire to expand their horizons coupled with a sense of adventure inspired the band to relocate to the Music City to seek their fortune.

On June 24th, the three piece 1970’s-tinged psych-pop outfit will release their debut album, Rose Park, which showcases the band’s unique, piano-driven rock sound, a welcome alternative to the guitar-heavy collectives prevalent in the scene these days. “You don’t really see too many rock n’ roll piano-playing frontmen anymore,” says Schmadeke with a laugh.

“We decided to go back up to Bloomington to record, our friend had built a studio in the basement of a bar there,” explains Mullen. “We played a show in Nashville on New Year’s Eve, and partied all night long. On January 1st, we drove to Bloomington and began recording that day, it was an interesting way to start the process.” The album was mastered by local producing legend Andrija Tokic at his Nashville studio, The Bomb Shelter.

While the band lyrically tackles some sensitive material,  Harpooner never comes off as preachy. “We hope to spread awareness of basic human rights and equality, which is something that’s very important to me. All of us grew up on the privileged side of things, which we’re obviously grateful for,” says Schmadeke. “I recently moved into a house, but I’d actually been living in my car for 6 months before that. I play with a lot of bands, so I’m on the road all the time, and not paying rent was the only way I could really afford to make this record. After being on the road for 5 years, sleeping in the streets, and not having any money for a long time, you meet other people who live that way, and realize that we aren’t any better than anyone else. We’re all the same.”

You can see Harpooner tomorrow night, June 23rd, at The Basement, as they celebrate the release of Rose Park before they go on tour; Chrome Pony and Walking Man will provide opening support.