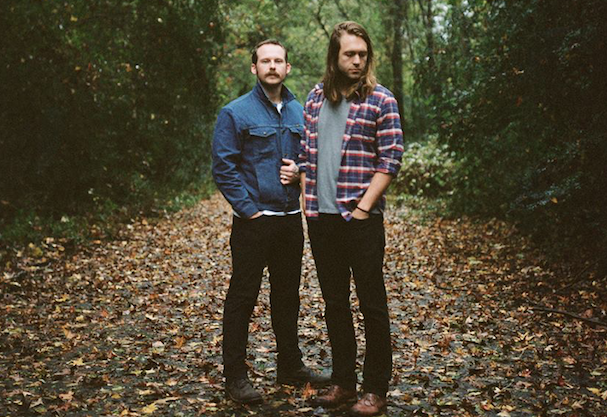 I recently had the pleasure of speaking with Andy Baxter, who, with Kyle Jahnke, comprises folkicana duo Penny and Sparrow.  The pair released their delicious new album, Let A Lover Drown You, on March 11th via Single Lock Records, and were en route to a venue in Seattle:

Andy: Social media has been kind, and people have already said nice things about the record and their connection to the songs.  We’ve been fortunate not to have anyone tell us it’s shitty.  We’re enjoying the honeymoon stage.

Me: Oh, it’s definitely not shitty.

Me: You can use that quote if you’d like.

Andy: We’re going to put that in our liner notes.

The former college roommates and band co-founders share an undeniable and musically magical connection, evidence of which is showcased on every groove of their new record.  “We bring in equal measure our parts to the songs.  Our process only works with both of us,” explains Andy. “This record stands out to the ear more because we recorded it together, he and I singing and playing in a booth at the same time, just me and him.”

Penny and Sparrow began in Austin, Texas, and has since relocated to legendary songwriting hub Florence, Alabama, a.k.a. Muscle Shoals. “We went there to record the album.  Before, we didn’t really have a house, but we knew we needed a home during the recording process with John Paul (White) and Ben (Tanner), and we needed a hub to tour from.  All four of us–us and our wives–rented a house there together initially, and we fell in love with the town.”

Now, if you know me, you know I have a certain fascination with John Paul White and his Muscle Shoals-based label, Single Lock Records, and Andy assured me that I’m not alone: “Getting to work with John Paul was absurd.  It was one of those things where if you had asked us five years ago who we would want to write with or work with, he would’ve been on a list of about three names.  Now, we get to called him friend and brother, it’s ridiculous,” says Andy.  “He’s so talented as a songwriter, lyricist, and performer, but on top of that, his work ethic is incredible.  He never sacrifices creativity and he has all the passion in the world, it’s amazing when that happens on your record, right in front of you.”

The pair desired to make an album with a cohesive group of songs; as they wrote, they noticed that a common theme was emerging right under their noses—the examination of love and to what people subject themselves for it.  “Humanity is prone to sabotage themselves, myself included.  We sacrifice what we want most of all for what we want right now.  It’s a youthful thing; if we’re lucky, we bleed less and less as we get older,” says Andy with a chuckle.  “The record examines love in hindsight, ‘why did I ever think this was okay?’, or ‘why did I let myself get in this position?’—whether it’s an abusive relationship or an abusive thought process.”

“The album’s title has multiple meanings,” he adds. “We knew it was a mouthful and we liked that, and that it was weird and unorthodox and memorable; to be in a good love, it takes sacrifice, you have to die many deaths every hour because we’re selfish by nature. Being in a good love can feel like drowning; by the same token, being in a bad love can feel like drowning, it’s both sides of the coin.”

One may assume that such an examination of past heartache and the retelling of it during performance after performance would take an emotional toll on an artist, but with Penny and Sparrow, that’s not the case.  “Maybe the tendency is to assume that when we sing these songs, we jump back into the headspace we occupied when we wrote them; it’s more common for us to hope that there are people listening in the room that are currently in that headspace, and that it’s an encouraging for them,” Andy explains.  “It’s cool to look back on the songs nostalgically to see how much you’ve grown.”

Penny and Sparrow are currently on a nationwide tour; you can see them perform at the beautiful City Winery in Nashville on Tuesday March 29th.  For tickets: http://www.citywinery.com/nashville/tickets/pennyandsparrow032916.html