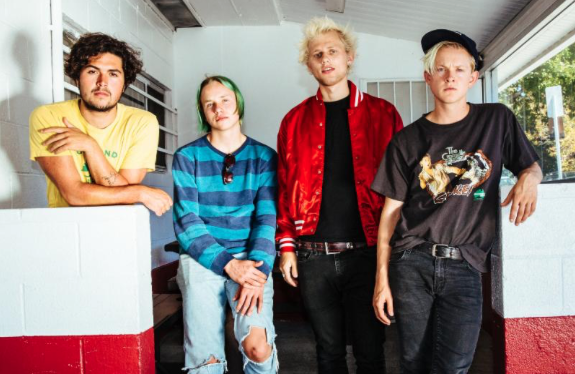 Brothers Cole Becker, Max Becker, and their longtime friends Joseph Armstrong, and Sebastian Mueller, also known as alternative rock outfit SWMRS, write songs about things to which people of all ages can relate. “We write about everything–whether it’s about facing a fork in the road of life, dealing with shitty people, or just being proud of where you’re from,” declares vocalist and lead guitarist Max.

The Oakland, California natives definitely sing the praises of their hometown; “I’m really proud of the diversity of the people, the culture, and the environment in general,” says Max.  “You can do anything there.”  In the title track of their brand new album, Drive North, the young rockers proclaim their disdain for Los Angeles and loudly encourage the listener to drive north (for our geographically-challenged friends out there, Oakland is north of Los Angeles).

“We definitely have a fun music scene there. Our fans range from 15 year old girls to 20 year old boys, and then all of their parents,” says Max with a laugh. “We actually have a record for the number of girls who stage-dive at our shows; every venue has said they’ve never seen girls comfortable enough to stage-dive at a show, but that’s what we’re all about, we want everyone to feel comfortable and have fun.”

Fun is definitely the name of the SWMRS game; the foursome subscribe to the Beatle Mania-style of social media, where the fans get photographic insight into what the band is doing all the time—even accounts of bathroom time and of the guys running around naked in Oregon (and let’s be honest, it probably didn’t phase anyone there).   The group is on their most adventurous tour to date supporting the record, their third release, but the first under the moniker SWMRS.  Their message, wrapped up in a refreshingly rowdy punk nouveau package, is resonating with the masses; on the day of its release, Drive North was already in the top five on iTunes’ alternative chart.

Don’t mistake SWIMRS’ carefree style as a lack of focus or seriousness about their craft, though; the boys released Drive North independently, and use their music to explore difficult and  socially relevant subjects. “Our song ‘Do You Have A Car’ is the most honest account of something my brother went through, and I think so many people can relate to it.  It’s about moving to a new place and starting a new chapter, you feel very alone,” explains Max.  “The first time I heard it, I cried.”  The group, who cites feminism as a band interest, included a tribute to one of the most controversial females of our time with their song “Miley”.  “It’s not just about her music; her music is fun, but we love following her progression, she does whatever the hell she wants, and it makes her seem more real.  She’s a person following a vision; she’s gone from Disney star, to hot girl, to weird girl, it’s so fun to watch,” says Max.  “I have so much respect for her, she makes me think.”

While we’re nursing our hurt feelings that SWMRS won’t be playing the Music City this time around, they just might be on their way to your neighborhood; they’ll be touring the planet through May, so check out their show dates: https://www.facebook.com/SWMRS/app/123966167614127/

Take a listen to their current single, the anthemic “Figuring It Out”: