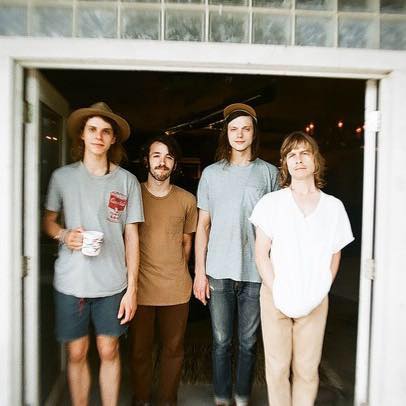 Recently, I met up with the very dapper Joshua Meadors, vocalist for Nashville indie rock band Ranch Ghost, at East Nashville dive Dino’s.  It had been a long day, I was in the mood for some hot, greasy goodness served up in a plastic basket, so I asked Meadors if he would share some cheese fries with me.

Me: Are you offended by Velveeta?

So, my brand new best friend and I tucked into those cheese fries and began a conversation about life, music, and a person’s right to eat Cheetos:

After moving to the Nashville area from inner city Atlanta with his father when he was 14, Meadors says “Nashville freaked me out”, so he moved back to Atlanta.  “I went to a tiny school here, and I was an alien, I was so flamboyantly myself.  Coming from inner city Atlanta, where there’s so much diversity, it took time to get used not having that here,” he recalls.  Meadors decided to return to Atlanta, but found himself back in Nashville a year later.  “I got into trouble and my mom sent me back to live with my dad,” he says with a chuckle. “I was an emotional kid, not like a typical emo kid, I wasn’t into emo music at all, I was into Shakespeare and literature.  I was a pretty angsty kid, I was the small kid in the class with a lot of insecurities. Our family didn’t have a lot of money, and I got picked on a lot. I was frustrated about being a person.  Eventually, I figured being angsty wasn’t very beneficial, and that I just needed to do what I needed to do to get where I wanted to be, so here I am.  Being able to be vulnerable in front of people and express my feelings and emotions in the form of art, that’s what makes me feel better, way more powerful, and not afraid to do something.”

Meadors didn’t play an instrument until he was 22 years old, instead beginning his foray into music by writing poetry at an early age.  “I was always fearful of playing music, worried that people wouldn’t enjoy what I made, or that I wouldn’t be successful,” he recalls.  The fates intervened when Meadors moved into a house in Franklin, Tennessee with some friends he had met through skateboarding. “I ended up moving in with the guys who are all in the band.  Andy [Ferro] was a guitar player and he introduced us all to really cool things.  We all got bored with just listening and decided to play ourselves,” he explains.  “Moving into that house was the perfect situation; none of us really had the intention of starting a band or playing music,” he says.  “We were all appreciators; I wrote all the time, Andy played a lot, but the rest of us fell into it unintentionally.”

Ranch Ghost, comprised of Meadors, Ferro, Matthew Sharer, and Tanner Lunn, was officially born in 2011.  This band proves that the DIY approach is a viable one—they only have two singles on Spotify, they do little to no promotion, and have nothing left to sell at this point.  Every bit of attention has been garnered by word-of-mouth, amassing a substantial following in Nashville, and interestingly enough, in Europe. Ranch Ghost has a self-titled record completed and ready to release as soon as it gets pressed, but getting vinyl records made around these parts can be a lengthy process.  “We don’t want to release it until people can have a physical copy of it in their hands,” explains Meadors, who adds that they hope to have a release in late February or early March.

Since their first recordings, Meadors says Ranch Ghost’s music has become more accessible; “When we first started playing music, it was definitely more angsty, and that came from being introduced to a world of modern punk rock.  There was a lot of garage stuff forming around here, it was a huge thing happening in town, and we were listening to a lot of crazy stuff from the 60s that had never made it to the radio for financial reasons or something like that. It contributed a lot to how we sound.  We all started getting into the lyrical side, the content and the message. We started really looking for the most in-depth and intense form of that, which ended up being Bob Dylan.  Musically, our influences are all over the place—Chuck Berry, Frank Sinatra, Miles Davis, so many different things coming together. We definitely have been able to expand our abilities,” he states.  “The songs on the album that I wrote the lyrical content for are generally protesting social inequality of every sort—emotional inequality, feeling like you’re less than someone else you see having an easier time of things than you are, or the kind that exists in the media world, with it being all about who you know.  If there’s a select group of people who don’t want to know you or don’t think what you’re doing is worth knowing about, then you’re experiencing the same thing you did in high school when the cool kids didn’t let you hang out with them, even though what you have to offer may be really incredible. I’ve always been a huge advocate for equality of all sorts—I feel like every person should have the opportunity to sit on his or her ass and eat Cheetos all day or be able to get up and make a living for themselves without having to do it for someone else.  It’s a common theme in our music.”

Meador admits he does not consider himself much of a lyrical storyteller; “I don’t have a lot of stories floating around in my head.  I feel like we have an opportunity to say something, address something we think should change.  The only thing that’s every really brought about change is art.  Music and art are a massive part of cultural change, it’s the rawest firm of human expression, the creation of something for someone else to perceive,” he declares. “Stories are cool, but I can read books for that.”

One thought on “AN EXCLUSIVE INTERVIEW with RANCH GHOST”