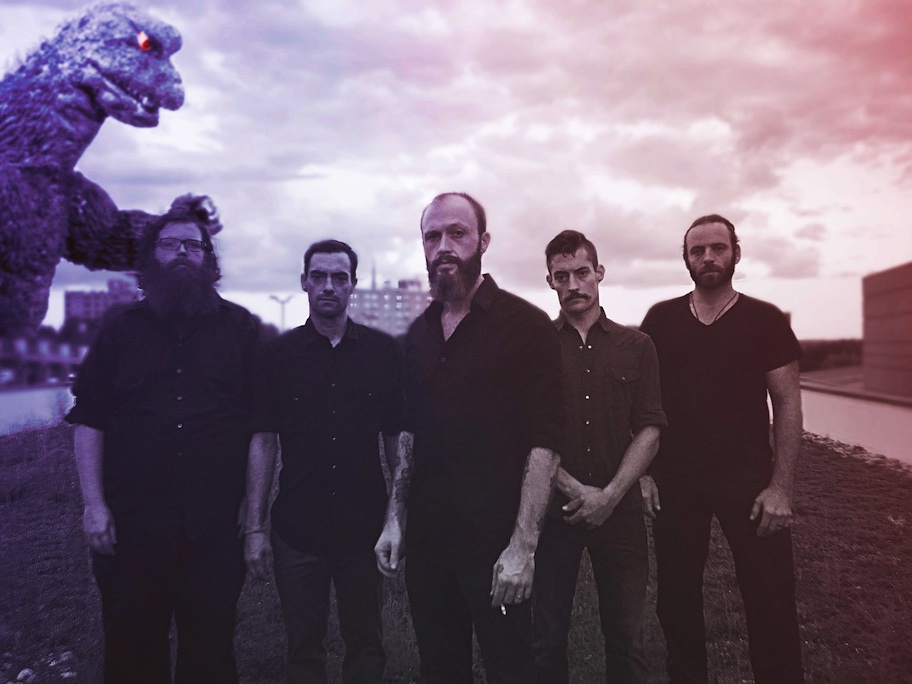 “I found my mother’s nylon string classical guitar in the basement of our house in San Francisco, and I started messing around on it.  I never had any formal training or lessons, which part of the reason why I play my guitar upside down and backwards, I’m a left-handed person playing a right-handed guitar,” says Shadwick Wilde, frontman for Louisville alt-country-ish band Quiet Hollers.

After moving to Louisville as a teen, Wilde played Ramones songs in his garage with friends, and joined a street punk band at age 17.  “It got me into the mindset of wanting to tour and become a working musician,” he recalls.  Year later, he started Quiet Hollers accumulating talented band members from the diverse Louisville music scene;  “Our drummer, Nick, I knew from my street punk band days, he was the drummer in another punk band in Louisville.  I met Aaron, our violinist, or multi-instrumentalist I should say, when I say him play with another band and I was determined to steal him away for my own project.  Ryan, our bass player, went to high school with Nick, they were kicked out of band class together, that’s how they became friends.  Ryan joined the band after moving back to Louisville from Arizona where he was going to school for lutherie, which is the making of guitars — he made the six-string bass that he plays in the band.  Jim Bob is the newest addition to the band, he plays keys and guitar, he and I worked at the same bar in Louisville for a long time,” Wilde explains.  “We like to have a lot of fun, we all have eclectic and varied musical tastes, so it’s always a fun conversation about what will go on the stereo.  It’s not always sunshine and daisies, but we all have a common goal and purpose, which is to make music as long as we possibly can, and we work together to make it a reality.”

The band released their self-titled record, the second full-length for the group, on October 23rd, which Wilde wrote, arranged, and co-produced. “Being done with recording and the first listen through after the mixing was a lot of fun, especially if you’re the kind of person who can let go and listen to it from a non-critical kind of place.  I’m still working on being able to do that.  It’s a lot of work, but it’s part of what I love to do.  I love to perform and play music, but recording can be a hyper-focused way of making it not fun anymore, it’s like putting it under a magnifying glass.”  There was an epic throw-down to celebrate all their hard work, Quiet Hollers-style.  “Right after we wrapped there was a crazy 4th of July party that ended in a hip-hop dance-off that included myself, Jim James, and members of White Reaper,” says Wilde with a chuckle.

Wilde notes that the songs on the record are all over the place when it comes to genre, but says that the first track on the album encapsulates a lot of what his writing style is about, and what the band is about as a whole.  “We put it first on the album, it’s a song called “Aviator Shades” which is a song that’s not about sunglasses.  It’s about alienation and social anxiety, living in the suburbs.  I write about what I know, because  if I try to write about something else, it doesn’t come out right. I’m very familiar with the internal struggles, that’s the source of most of my material,” he says.

While the subject matter may be heavy, the band obviously has a lot of fun doing what they do.  A few weeks ago, Quiet Hollers release a video for their cover of Madonna’s “Material Girl”, an interesting choice, to say the least.  “It was a fan-chosen cover song.  We were raising money to record the record, and one of the perks was that if you contributed a certain amount of money, you could pick a song for us to cover, and the first one that came in was “Material Girl”.  I believe the fan that chose it has a deeply cruel sense of humor,” laughs Wilde.  “I’m not a fan of pop music per se, but Madonna is pretty cool.  I was horrified at first, but it turned out to be kind of fun.  I did it like it was one of my songs, you know, sad.  I wanted to do a funny video for it, so that’s where the ironing comes in.”  Take a gander at it and see the band’s interpretation of the Madonna classic for yourself:

You can catch Quiet Hollers live, performing for the Palaver Records showcase at Nashville venue The Basement on December 5th.  Tickets for the 21+ show (sorry young’uns) are only $5.  Doors are at 8:30pm and the fun begins at 9pm.  Don’t miss it!