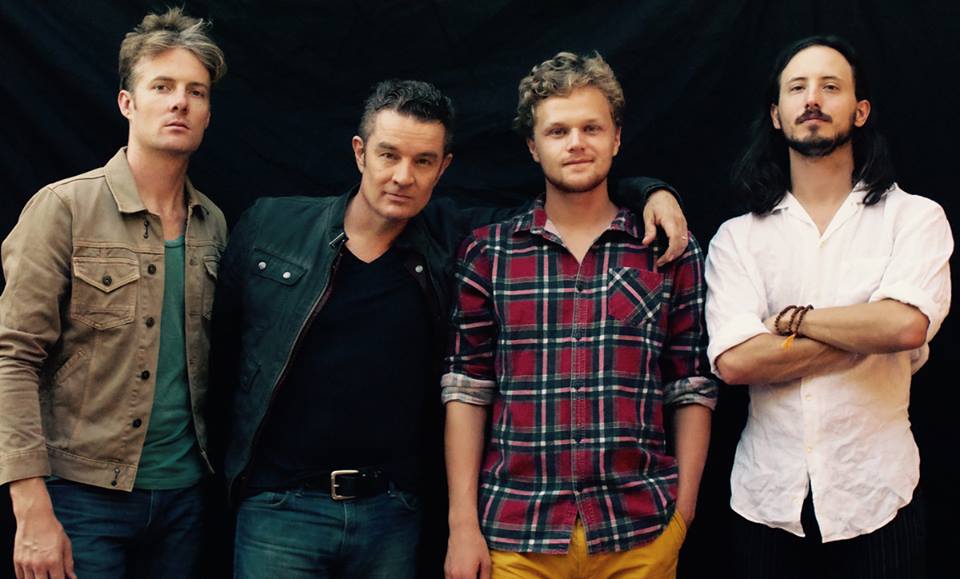 By the tender age of 14, James Marsters had fallen in love with music and was already playing in bars–“for free, which probably made me seem way more talented than I was,” he says.  “At that time, I refused to play anything besides James Taylor songs. I was a one-man James Taylor knock-off band.”

He continued to play music, but decided to study acting in college. “Joseph Campbell said to ‘follow your bliss’, and I found more bliss in acting at that time.  I’d started acting in elementary school, and by the time I was in high school, I was usually doing two plays at a time.  Music never left, I played for myself,” Marsters recalls.  He went on to act professionally, and landed the role of bad-boy vampire heartthrob Spike on cult television classic Buffy The Vampire Slayer.  “When I got on Buffy, someone asked me in an interview whether I played any instruments, and I said I did.  Some folks from the clubs around town read the interview and asked if I wanted to come play,” says Marsters. “I was horrible; it’s one thing to play for yourself in your bedroom, but it’s a whole different thing to entertain people who pay.  I was like ‘if you want to see Spike suck at guitar, come on down,’ he says with a laugh.  At one point, he was playing at The Key Club on the Sunset Strip, when someone told him that Pink was there and was excited to hear him play. “After the show, man, Pink wasn’t around,’” he says with a laugh.  “I didn’t give up though, I kept at it, kept playing, and really bothered my neighbors.”

One day,  18 year old musician Charlie De Mars moved in next door to Marsters; De Mars had made an album with his band in Sacramento and  moved to Los Angeles to shop the record around town in an attempt to get signed.  The two started playing together; “I listened to his album and was floored, so much talent,” says Marsters.  “He asked me if I wanted to form a band, and I said ‘hell yeah.’  That was the spine of Ghost of the Robot.”

In a whirlwind couple of years, they formed a band, made an album together that sold like hotcakes, went on tour playing to sold-out crowds in London, Paris, and Germany, got a little bit famous, and promptly broke up.

“We weren’t up to dealing with the stresses of touring and performing so that we could deal with each other in a healthy way.  They were young, and I was a spoiled t.v. star.  I was aware of this; I was starting to become hollowed out by the experience of fame, I was losing my heart, and it was horrifying to me.  My lack of maturity definitely contributed to the breakup,” explains Marsters, who then embarked upon what he refers to as “a questionable solo career”, releasing two albums that sold well but that he didn’t really like.  Seven or eight years later, Marsters says loved ones were listening Ghost of the Robot’s album and were encouraging them to get back together.  “So we did,” he declares, “and it’s been a glorious ride.”

The band released their third album together, Bourgeois Faux Pas, in September. “It’s tastier but it’s got a raw feeling,” Marsters says, comparing the sound of the album to the band’s first record.   “I couldn’t be happier.”  Another change–Ghost of the Robot now has three songwriters: “The third singer/songwriter happens to be my son.  They voted him into the band without asking me! He’s 19 years old!  The band was like ‘we’ve found our new guitarist!’ and I said ‘thank goodness, we’ve been looking long enough! Who is it?’ and they said ‘it’s your son! As a dad, you can veto it, it’s a weird lifestyle.  As a bandmate, you’re outvoted, so shut up.’  We had to work around his school schedule. but it was worth it,” says Marsters.  Each writer sings the lead on his respective tunes on the album, which Marsters believes injects a different flavor into the mix, keeping things interesting.

The band has played some dates in France, Italy, and Spain recently, and is gearing up to tour the album this coming summer.

Marsters says there are people will sometimes come to their shows in the hopes of seeing ‘Spike’–but they get a whole lot more than that.  “At the beginning of the show, you’ll see a lot of women of all ages with really big smiles.  Sprinkled throughout that crowd, you’ll see a lot of guys with their arms crossed who look kind of mad.  Then by the end of that show, you’ll see everybody with big smiles, especially the guys, arms in the air, really enjoying it,” he says with a chuckle. “I mean, we’re a band of guys writing from a guy’s perspective about love, about the pain that women put us through! Guys can definitely appreciate it.”