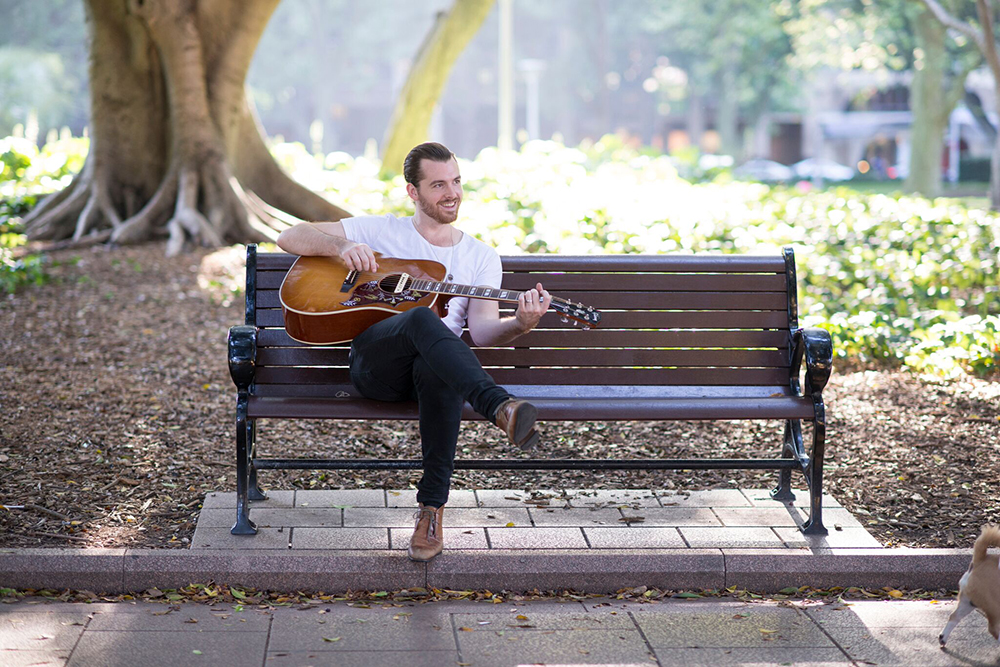 Recently I had the pleasure of watching a music video that left an indelible smile on my face and hope in my heart; the video was for a song called “Ordinary People” by English-turned Australian singer/songwriter Richard Soward, who performs under the moniker “CuzN“.  The song by itself is an anthem, but the video is what seals the deal on this heart-tugger.  The video, filmed in one day on the streets of Sydney, features a host of random strangers holding signs bearing the lyrics of the song as it plays, restoring my faith in humanity’s ability not to take itself so seriously.  I decided I had to find out more:

East of 8th:  When did you decide, and what caused you to decide to travel this musical path?

CuzN:  I’ve been playing drums since I was 11 and always loved jamming with my friends and annoying my neighbours with our loud rock music. When I was 25 I realised, with busking and gigs, I could quit my job as a ‘Defect Investigator’ and make a career out of playing music. I adore the fact that with music, you’re given the ability to vent and (albeit temporarily) transport your listeners to a whole different mental space.

Eo8:  You’re originally from England; what facilitated your move to Australia?

CuzN:  My wife is Australian. I fancied a change of scene.

Eo8:  There is so much amazing music coming from Australia these days! What has your experience pursuing a music career there been like so far?

CuzN:  Amazing! I’ve made massive strides forward in my career since coming here. It’s partly down to my change of attitude and work ethic, but I just love how up for it Australians are! I’m really enjoying living and working here.

Eo8:  What was the inspiration behind your amazingly catchy single “Ordinary People”?

CuzN:  I just wanted to write something fun. My set was becoming a little one-dimensional, so I sat down with my guitar and this song popped out! I didn’t realise it would even get in my set at the time but the response was brilliant. Now it’s the single!

Eo8:  The video for “Ordinary People” has you roaming the streets of Sydney enlisting the help of strangers.  Can you describe that experience?

CuzN:  I’m not sure the music video would have worked better anywhere else in the world. I’d say 80% of people we approached were happy to be involved. People in major cities spend so much time in their own headspace when getting from A to B, it was nice to shake up the norm a little and interact and laugh with complete strangers.

Eo8:  What do you hope your music accomplishes when you release it into the atmosphere?

CuzN:  I hope that globally I can reach millions of people. I want people to love my music and be affected by my music like I have been by some of my favourite bands over the years. Music has given me everything. If I can have a platform to try and inspire others that would be a dream come true.

Eo8:  What’s the best piece of advice you’ve been given?

CuzN:  SING FROM YOUR FUCKING HEART!!!

CuzN:  Dunno, might release a perfume ‘eau d’cuzn’. Or just write some more songs and hope people respond to them. Thank you 🙂