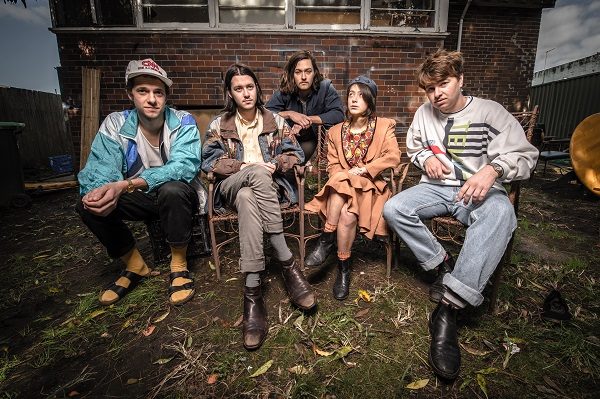 Oh Australia, you’ve done it again.  Just when I thought there couldn’t possibly be any more delightfully dance-tastic tunes from one more swoon-worthy group of musicians housed within your quirky continental borders, you give us New Wave dance-pop darlings Big White and their scrumptiously-crafted album Teenage Dreams.  Sigh.

East of 8th:  You met when you moved in together, how did you decide to form a band?

Big White:  We kinder trickled in from different parts of the state, some from Sydney, others not.  We didn’t really make a decision one night to start a band, it happened out of incremental nights, trips away, and the slow break up of other musical projects that moved into becoming Big White.

Eo8:  You all live in the same house–pros and cons?

BW:  Pros–You get to hang out with some of the best people, compete, collaborate, revel, and laugh about all the different kinds of music and art each one of us is working on.  If one of us is having the so-called writers block, then there’ll definitely be someone in the next room that doesn’t.
Cons–There aren’t too many cons.  Everyone’s got space to pursue their individual projects. We enjoy it.

Eo8:  Tell us about this house with the speckled past where you all reside.  How has it and the experience of living together affected and/or shaped your music?

BW:  It was built in the 1920’s, very reminiscent of an art deco/Californian bungalow-esque feel.  It has nine rooms, quite a rare house in Sydney’s standards.  It’s an environment where people are always coming and going, ideas are being thrown about, films, visuals arts, essays, and all that pseudo-intellectual junk.  The diaspora of this through all involved helps write the music that we are trying to create, anecdotes and snapshots, little stories of us growing up and growing down.

BW:  Our first recording session could be said to be the real start of Big White, and although we were all living in our house together here in Sydney, we were in fact on the opposite side of the world.  It was in Berlin at the beginning of 2014 that we recorded our first single, ‘I Can’t Tell’, when we were all traveling together around Europe. On an extremely cold Krausberg morning, we made our way down the river spree with icicles hanging from the reeds to a studio situated underneath an old Soviet-style apartment.  Apparently it used to be used as a bomb shelter, so we liked the vibe and we did a quick rehearsal and laid out the song on 8 track.  It was a serendipitous first experience and place to have everyone together for the first time in the same studio.

Eo8:  You have an album coming soon, tell us about the creative process, like the inspiration behind the songs and recording.

BW: We spent all last year picking over these songs.  I think for you folks in the States our album Teenage Dreams can be streamed online; limited release tapes can be bought through Burger Records with them bringing vinyl out mid-2016.  As I’ve mentioned, we’ve taken a lot from conversations, nights out, sharing life’s intricacies, and basically trying to have a good time most of the time.

Eo8:  You’ve done some touring, any fun stories from the road you can share?

BW:  Some of the best stories came from us going to Austin for SXSW; we traveled back to L.A. with some great bands from Burger and Lollipop Records.  I’d say Flagstaff was one of the funnest nights of the tour, what a place nestled up there on the plains with that big mountain overlooking it.  Then of course, there was Burgerama–needless to say was one the best shows we’ve ever played.

Eo8:  Will you come to Nashville soon?

BW:  Heading back to play Burgerama again in March, so we’ll be doing a more extensive tour of the States, followed by a stint around Europe at the back end of our North American shows.  We’ll be releasing the album Teenage Dreams here in Australia through Caroline records, and will be back on the road for the album tour over here also, lots of stuff.  We’ll keep you posted.
Facebook|Twitter|YouTube