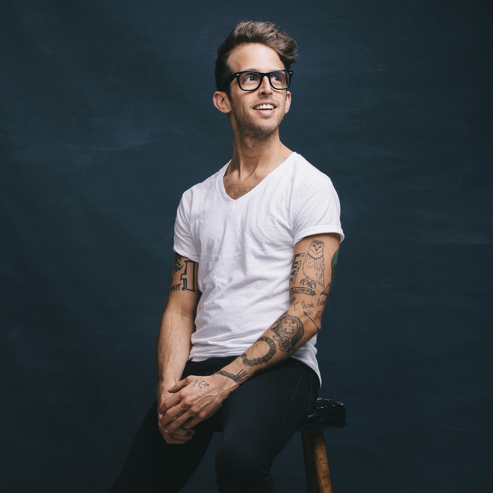 Troy Akers grew up with dreams of becoming a surgeon; “In America, if you’re a doctor or a lawyer or something, that’s successful, that’s great.  The whole time though, I was falling in love with music and writing.”  He held onto that idea until he was in high school, when he began writing songs.  “My grandfather bought me my first piano; he passed away shortly after, and then my grandmother passed away six months later.  I wrote my first piece and played it at her funeral.  I can still play it 15 years later.”

Akers finally decided that music was his path; he joined a band in college called The CO (which Akers says is on “a sort of indefinite hiatus” at the moment).  While taking some time off from The CO, he continued to write on his own; Akers soon found himself with a cache of songs that were a little dark and deeply personal, songs that didn’t quite fit into what he’d been doing with his band, and weren’t the kind of songs made for collaboration.  He realized that an opportunity was presenting itself–the time was right for a project, and Bandit Heart was born.

“This is the first time in years that I’ve felt completely myself and comfortable with my writing and my music. It’s like suddenly feeling at peace, like creating an emotion and a time and feeling of something particular that’s very personal to your life, and you get to let go of it in a way, that’s very therapeutic.  I’ve been doing music for so long, and with Bandit Heart, it’s the first time I can say, ‘that’s all me,'” he explains.

The unnamed record is a chronological timeline of a relationship from beginning to end; “I didn’t intend to write a record about my last relationship, but the chance to record it pulled me out of the turmoil.  Roughly, I’m releasing a song a month, I want to let each song speak for itself.  Each song will bring people through the story.  The first song, “Ghost,” is about this awakening moment after you’ve been in a relationship, you’ve been out of it, you’ve most likely been forming this person in your head that once was but also probably didn’t exist.  You miss them so much you start thinking things that weren’t even true to who they were as a person,” Akers says.

While he’s hoping to release the album in its entirety this spring, he’s not in any hurry, and says, “I want it to be a slow, natural thing.  I miss the days when we were younger, waiting to get a record, and then chewing on it, going through it, reading all the lyrics, all that stuff.  I feel like now,  a record comes out and then it’s gone.  For the first time in a long time, I’m not in a rush.  I want to experience and feel everything that’s going on around me.  That time period in my life was a big, growing, hard, challenging time, and I think to put something out about it and just be done, I don’t know, I want to give it the credit it deserves.  I’m excited.  It’s big sigh of relief.”