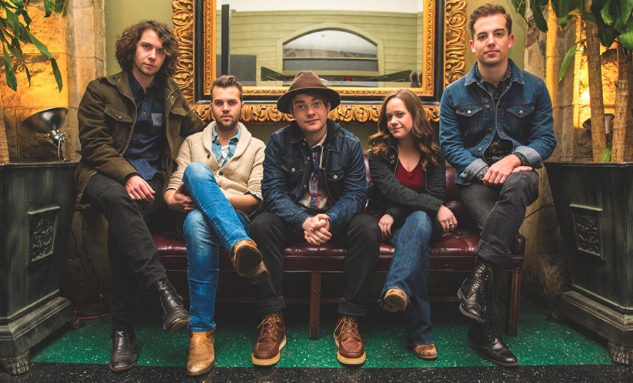 Nashville-based folk-rock outfit Guthrie Brown and the Family Tree have been a busy lot, touring around with the legendary Jonny Lang, playing shows at Nashville’s Musicians Corner, performing at this year’s Americana Fest, and gearing up for their show the inaugural Pilgrimage Music Fest in Franklin, Tennessee this Saturday.  I had a chance to chat with frontman Guthrie Brown about where they’ve been, and where they’re headed.

Brown, the youngest of four kids in a musical family, grew up with the idyllic and majestic Montana landscape at his doorstep.  Music was a way of life for the young Brown, who dreamed of one day moving to the Music City: “I had a few different bands in high school; high school wasn’t really for me, so I got my GED.  I got accepted to a music school in Minneapolis, but I decided to head to Nashville instead.  Ever since I was a kid in Montana, I’ve dreamed about going to Nashville.  I’d heard there were so many different types of music scenes in Nashville, that it wasn’t just country music.  New York and Los Angeles kind of freak me out.  I mean, I’m from Montana, like from the sticks.  It was a nice, easy adjustment for me; Nashville’s kind of like a small town with a big industry.  I’m a songwriter, that’s my craft, that’s what I love doing the most, that and performing, so coming down here to learn from some great mentors, it’s great.  Nashville is amazing,” says Brown.

Brown, a passionate songwriter, relishes the freedom of the craft, and the potential impact that his work can have on others: “There’s a guy has has some of my lyrics tattooed on his arm, and he told me that that song had had a really big impact on his life. I wrote the song for fun, but then that experience made it mean so much more.  It’s something I’ve always loved.”

He’s been in his element in Nashville for the last four years, but admits that he misses the wild, outdoor-centric, natural life so easily accessible in Big Sky Country. “In high school, I’d get out of school and I’d go fly fishing with my buddies, I was the most outdoorsy kid imaginable.  It was tough to leave because I loved it so much. Thankfully, my parents still live up there, and I get to visit about once a year. I don’t miss living there necessarily because I have to be traveling all the time, I have to be doing music, that’s in my DNA.  Montana was a great place to grow up, I feel like you learn a lot quickly and it’s nice being in nature and having those experiences as opposed to growing up in a city. I live in East Nashville right next to the Cumberland River, and I keep my fishing pole right next to the door, so I’ll walk down to the river and go catch bass whenever I’m feeling a little claustrophobic.  It’s nice.  I love Nashville.  New York or Chicago I couldn’t do–I love visiting those places, but it seems overwhelming to live there,” he explains.

His group, The Family Tree, which has an obvious and effortless chemistry, really is a family affair–Brown’s sister Maddy is a vocalist in the band, which he truly appreciates: “People think it might be complicated having a sibling  in your band, but they know every single part of you, and you know every part of them.  A band is like a huge marriage, it’s a big relationship where you have to make sure everyone’s doing alright,” he says, adding, “With Maddy, it’s always the easiest because we’re on the same page and we can be as honest with each other as possible, and that reflects on my relationship with everyone else in the band. We all are really open, I feel like this is the most exciting band I’ve ever been a part of.  I’m really fortunate.”

The band is ready to take some time off and get back in the recording studio, but before they do, you can catch Guthrie Brown and the Family Tree this Saturday, September 26th, at the first annual Pilgrimage Music Festival in Franklin, Tennessee; the band’s set begins at 11:45 a.m.