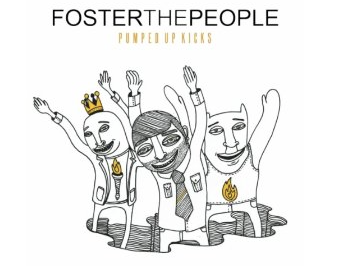 In 2010, I found myself in Los Angeles for some reason; Los Angeles has this incomparable radio station called KROQ, a bastion of alternative rock n’ roll that sets the bar nationally, and shows a lot of love and support for the local music scene.  As I was driving one day, this peculiar song came on the radio (of course, reverently tuned to KROQ) that stopped me in my tracks.  I turned up the volume and just listened; a consistent and catchy bass riff, curious vocals stylings, and an infectiously bouncy chorus…it was an amazing combination, and I was HOOKED.

That song was “Pumped Up Kicks,” by Foster The People.

It wasn’t until later, when I moved though my sonic infatuation, that I realized that this upbeat tune had some ridiculously dark lyrics, written from the perspective of a troubled and homicidal young person, and eerily reminiscent of the Columbine High School massacre in the mid-90s.  The song’s subject, Robert, has found a gun in his father’s closet and is toying with the notion of using it on his father and “all the other kids and their pumped-up kicks.”  Frontman Mark Foster was quoted in a 2012 interview with CNN as saying of the song:  “I wrote ‘Pumped Up Kicks’ when I began to read about the growing trend in teenage mental illness. I wanted to understand the psychology behind it because it was foreign to me. It was terrifying how mental illness among youth had skyrocketed in the last decade. I was scared to see where the pattern was headed if we didn’t start changing the way we were bringing up the next generation,” adding that he wanted to “get inside the head of an isolated, psychotic kid” and “bring awareness” to the issue of gun violence among youth.  I like to write about real-life topics, and I like to write about different walks of life. For me, that song was really an observation about something that’s happening in the youth culture these days. I guess I wanted to reveal that internal dialogue of a kid who doesn’t have anywhere to turn, and I think the song has kind of done its job. I think people are talking about it, and it’s become a point of conversation, which I think is a really healthy thing.”

Shortly thereafter, the popularity of “Pumped Up Kicks” spread like wildfire, hitting the #1 spot on Billboard’s Alternative Chart, and crossing over to mainstream radio, shooting Foster The People’s star into the stratosphere.  Gary Trust of Billboard said of the fantastic band and their phenomenal song, “They’re walking a tightrope very well in terms of eras, formats and styles. When you mix all that together, it becomes a very good recipe for a hit that works on so many levels. It’s the perfect song.”  I couldn’t have said it better myself.