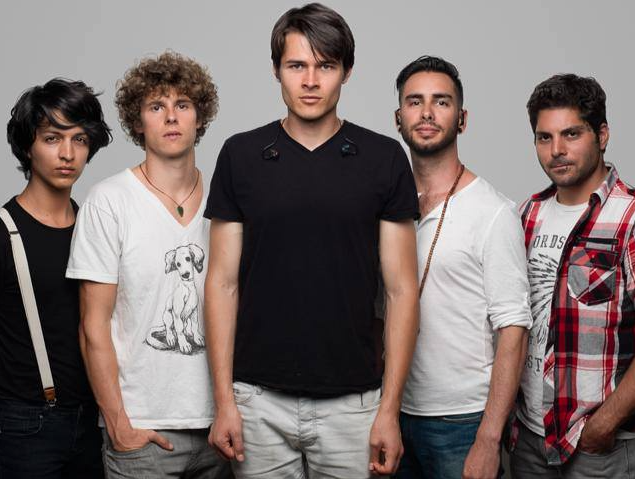 I’m what you would call a lifelong band geek; marching band was and has always been a closely-held passion of mine, so when I heard about an indie rock band using a marching band to record a single, my interest was definitely piqued.

Meet Los Angeles-based indie-rock band Trapdoor Social, whose new single “Fine On My Own” features the Mesa Ridge High School Band from Colorado Springs, Colorado.  I had the chance recently to catch up with Trapdoor Social co-founder Skylar Funk (also a lifelong band geek) about the collaboration.

The group became acquainted with the marching band last summer when they passed through Colorado Springs on tour, and stopped by a supportive local independent radio station to say hello.  The end of the tour coincided with Mesa Ridge’s band camp, and one of the DJs, who has a kid in the marching band, suggested that Trapdoor Social  stop by and play for the kids, which they did.  A few weeks later, Skylar was driving the band van and still thinking about the marching band; the thought occurred to him that it might be fun to collaborate with the band and feature them on a song.  Everyone else was asleep in the van except the guitar player, who suggested they do “Fine On My Own,” a song Skylar had written a little while back.  “It’s got those hits, that rhythmic hook that’s very simple and just really speaks to horns.  I ran with it, got it written out, and made plans.  The next time we were back in Colorado Springs, we recorded the kids playing their parts and shot a music video. It all just kind of came together,” explains Skylar.  The fun didn’t stop there; Trapdoor Social also performed a benefit show, held an online fundraiser, and presented a check for over $7,000.00 to the Mesa Ridge High School Band. “It’s been really fun to get to know these kids too; they’re really committed and they work hard, it’s amazing,” says Skylar.

Skyler says they plan to make the collaboration a show tradition when performing “Fine On My Own” live: “Anywhere we can get a band, we will use one! I was in New Orleans in March for a bachelor party, and one day we hired a brass band and had our own parade.  I’m going to definitely hire a brass band to play with us when we perform in New Orleans.  I’ve also been trying to connect with my high school band, I’d love to play with them when we go to Washington.  We’d do the same collaboration with any band anywhere really, it’s a great way to connect with the community and have fun with the kids.  It’s ready to replicate.  That would be killer.”

“Fine On my Own” will likely appear on the band’s next album, which is almost complete.  “It’s 11 songs; Louie, our guitar player has written some songs for it, it’s not just me and [band co-founder] Merritt (Graves) doing all the writing anymore.  We’ll make sure it doesn’t suck!  We’re hoping to release it sometime in 2016.”

The band recently performed several shows with Nashville-based band Civil Twilight in Colorado, and they plan to do some solar-powered touring in the near future; Skylar and Merritt, sustainability advocates who met in college and shared the same environmental analysis major, decided to acquire a solar trailer to tow behind the van which enables Trapdoor Social to use solar power to run their equipment.   Skylar says, “It’s amazing.  We can run lights and sound for hours with it; we’re going to use it for some shows we have in southern California, and we’ll use it on our next tour.  It’s like a dream come true”