If you haven’t heard the fuzzy garage rock revelry that is The Filthy Souls, you are missing out. Big time.  I had the pleasure of spending some quality telephone time with frontman Dave Green and his beautiful British accent recently, about the quartet’s beginnings, the Los Angeles music scene, and their penchant for curious album art.

The band formed in Wigan, a town right outside of Manchester, England.  Touring brought the boys to Los Angeles; they became so enamored with the city that they said goodbye to the overcast skies of England and made the move to sunny southern California.  “We love LA because you get fanatic people who really care here, you get a lot more appreciation, I think, especially being English, it’s kind of got a little bit more of a charm for people,” says Green.  While they love perpetual sunshine, a busy band schedule, and having everything right at their proverbial doorstep in Los Angeles, Green says they miss England, their families, and of course, their local pub. 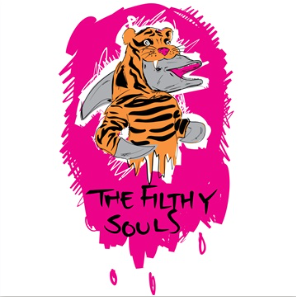 The Filthy Souls are not only a band, they’re best friends (and roommates living together in North Hollywood).  They have a lot of fun, Green says maybe too much fun at times, holding firmly to the belief that the band that plays together, stays together (see what I did there?).  As for the development of the The Filthy Souls’ sound, Green explains, “Our dynamic is solid.  Our guitarist, Danny, is really into Jeff Buckley.  Dan, our bass player, grew up listening to Rage Against the Machine, and he can really rip.  Our drummer, Topher, is really into Dave Matthews.  Sometimes we tell him to stop getting so fancy with the drumming, and try to dumb it down a little bit for the rest of us.  I grew up listening to Kings of Leon and The Strokes, things like that; my writing style is influenced by a lot of that.  I think you’ll see a bigger sound and different styles with our new stuff.  The garage rock thing we enjoy, but we wanted to try some different things on the new record.  The other guys did more writing on this one.  I’ll come with an idea, demo it, and everyone makes their parts.”

The fantastic foursome is currently working on a brand new LP, tentatively called The Darker the Night, The Brighter the Stars, which Green tells me will be out soon.  To tide us over, they’ve released three of the album’s ten songs via Noisetrade, “Boys Will Be Out For A Fight,” “I’m Gonna Take You To My Show,” and “Misery,” which you can download ” target=”_blank”>here.  FOR FREE.  Green says the only stipulation to downloading the Noisetrade songs is that you to share it with at least one friend.  Totally doable.