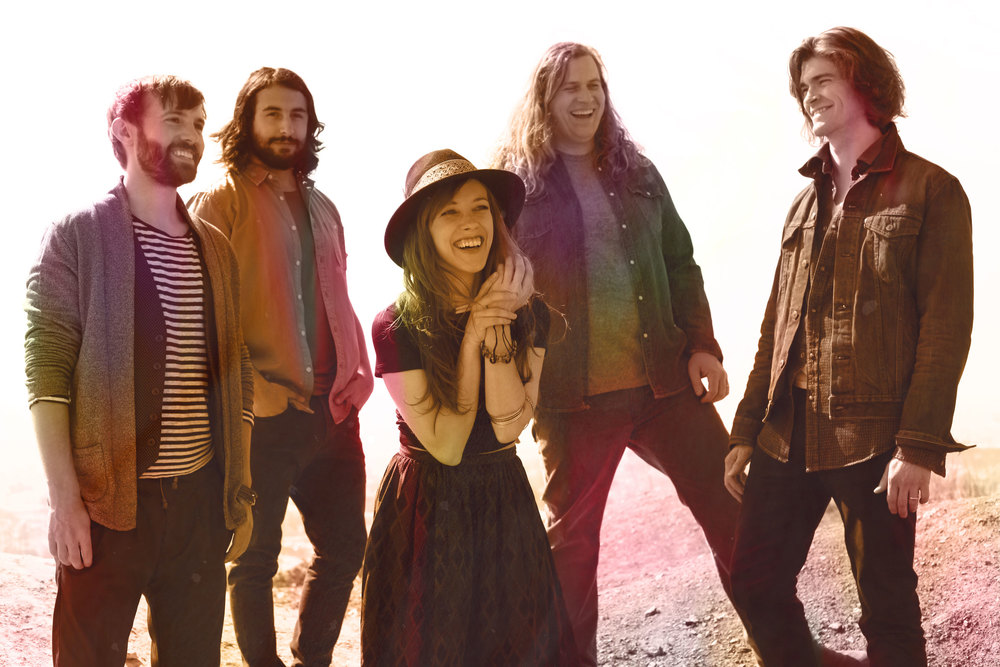 Los Angeles-based indie rock outfit The Lonely Wild, comprised of Andrew Carroll, Ryan Ross, Andrew Schneider, Jessi Williams, and Dave Farina will be performing with The Family Crest at The Mercy Lounge this Friday, July 10th.  The self-described “purveyors of Spaghetti Western-influenced Americana” think of Nashville as a second home of sorts; when I spoke with frontman Andrew Carroll recently, as the band was traveling in the tour van from Boise to Salt Lake City, he chuckled and said, “We love Nashville!  Either last year or year before, we realized we’d played more shows In Nashville than in our own hometown.”

In case you aren’t familiar with The Lonely Wild, let’s get you up to speed…Ross, Schneider, and Carroll met in college in Los Angeles.  Ross and Carroll had a band together in college, and when that had run its course, Carroll decided to start a new project, began writing lots of songs, and asked Ross to join him in this new venture.  Schneider had moved back to Los Angeles from a short stint in New York City, and he started playing with Carroll and Ross.  The trio took on the name The Lonely Wild, added a couple of other members, and started playing some shows.  A lineup change was in the cards–they met Farina through mutual friends, and when the group saw Williams perform at a club with her old band, it went a little something like this:

The Lonely Wild: “You should be in our band!”

So there’s that!  The band will be releasing their sophomore LP, Chasing White Light, in early October.  The album was recorded in San Francisco with producer John Vanderslice, who was able to pull the band out of their respective comfort zones, and wouldn’t allow them to nitpick the heck out of everything; he also encouraged them to capture each moment as it happened and then moved them along, keeping the energy and flow going.  I had heard the LP referred to as “the death album,” so of course my curiosity was piqued.  Explained Carroll:

“The last record was little more broad with social and political themes.  This new album is little more personal; my wife’s grandmother had just passed away, and death was on my mind a bit.  I began reflecting on people in my life who had passed on, friends and family, and it slowly started being centered around that, how that affects those of us who are still here, and it became Chasing White Light.  It’s not telling a linear story necessarily, it has the same themes running throughout the songs.  The song order shapes how the record unfolds, it was intended to be a certain way, for sure.  It turned into a pretty fantastic record for us.”

Carroll said the band’s music has gotten more experimental, “it doesn’t rely as heavily on that western feel, we’ve been exploring new things, but it definitely still sounds like us.  It’s more experimental, less Americana.  This time around, the songs themselves, at their heart, are singer/songwriter tunes that can take on lots of different shapes, and I think a lot of what we found in the studio, just experimenting with new textures and new little toys and instruments in the studio, reshaped the songs and each one has its own identity now.  We went to the studio with a pretty clear idea of how we wanted each song to sound and a lot of times that got thrown out of the window and we were like ‘ok, let’s just approach this in a new way, let’s try piano or synthesizer instead of guitar here or there.’  I think it brought a different sonic palette than we re used to or that we would’ve done in the past.”

The band will be doing a Lightning 100 radio spot on Friday afternoon before the show, hope to spend time with their college buddies who own Nashville’s Green Brier Distillery, and Carroll added that…*ahem ahem*…they might play an acoustic set there, just saying…and no trip to the Music City would be complete for the band without a stop by Grimey’s.

The Lonely Wild is currently touring like crazy, but will be taking a month or so off; one bandmember’s wife is due in August and Carroll’s wife is due in September, with their first child, which prompted me to tell him that there’s about to be less “lonely” and a whole lot of “wild” for them in the very near future.  It’s truly a busy and exciting time for this band; come tell them congratulations in person this Friday at The Mercy Lounge, or check out their social media to stay in the know and see them when they come to your neck of the woods!