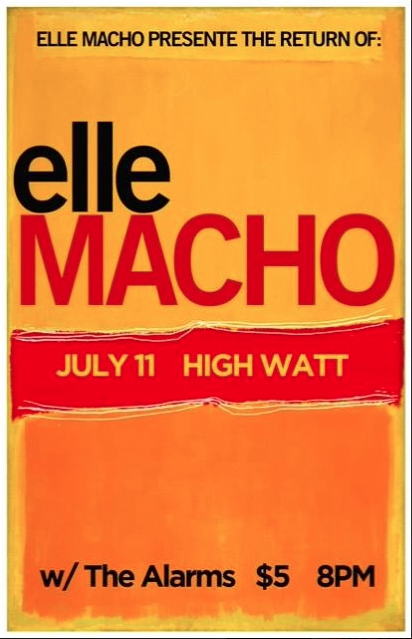 Nashville indie rockers Elle Macho, comprised of David Mead, Butterfly Boucher, and Lindsay Jamieson, are playing their first show in two and a half years at The High Watt on Saturday, July 11th, and pop/rock quintet, the Alarms, featuring members of blog favorite, electro-pop band KiND, have announced that they’re opening the show!

“If you want to hear authentic British Invasion-era pop music fortified by refined rock ‘n’ roll born and bred in the USA, then wake up. The Alarms are ringing and they demand your attention with Real Tough Love, the band’s debut CD released this week.  This is pop for the purists – bristling with urgent guitars, impassioned vocals, densely packed arrangements and harmonic intelligence.”

I couldn’t have said it better myself.  Check out the Alarms’ new video for their song “The Axe,” a Lightning 100 Pick Of The Week last summer: