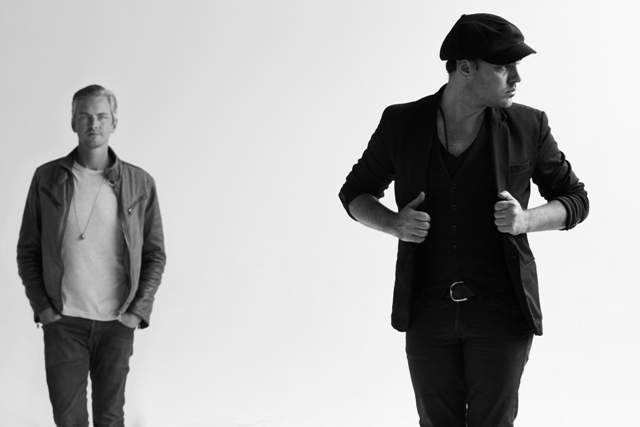 I love it when bands transcend genres, allowing innovation and creativity to rule.  I especially enjoy the chance to make up new names for ways to describe music for you, precious readers.  Meet Los Angeles-based Say Say, comprised of Adam Reiter and Jesse Gurtis, whose blend of acoustic and electronic are a refreshing addition to the world, making Acoustitronic/Electricoustic (see what I did there?) music for the masses that will be readily available to us on June 30th!  I had the chance to chat with these lovely gentlemen recently about their debut EP, Prelude Of A Dream, their musical partnership, and their plans for world domination.  PS: Adam also wants you to know that Jesse’s single, ladies…

Eo8:  How did Say Say become a thing thing?

SS:  Jesse and I (Adam) met through mutual friends and bonded over our love for similar kinds of music.  Jesse has a really awesome record collection; that’s how we really became friends actually, I was going through his record collection and he had a lot of things I grew up listening to and a lot of things I’d never heard. He does this DJ/vinyl/mixing kind of thing, and we enjoyed the same music, and decided to make our own.

Eo8:  How did your style originate?

SS:  Our parents have similar tastes in music, which is a good thing, because we were obviously brought up right on The Beatles and The Beach Boys and Boston and Aerosmith and Moody Blues.  I (Jesse) fell in love with the electronic music scene when I was about 18, and started DJ’ing about 15 years ago.  I got really deep into that, I love the sound of electronic music.  Adam was playing in a different band and was doing some cool things.  I started throwing my two cents out there with ideas for stuff, and we started working on things together.  I got him hooked on some music I never thought he’d take a liking to.  It moved us in an electronic direction with an organic feel, with the guitars and vocals, and it meshed really nicely. I’m (Adam) a singer/songwriter and was writing songs; we mixed in the electronic sounds, and somehow it just worked.  The elements came together in a really organic way.

Eo8:  There’s a growing electronic music community here in Nashville, and they’ve encountered folks who throw shade on it, saying it’s not “real music.”  What are your thoughts about that?

SS:  The people that say that sort of thing don’t understand the idea of what music is.  Music can be as simple as me snapping my fingers or throwing a stick on the ground.  You can create music out of anything.  To put a boundary around that is ridiculous, there should be no boundaries on art.  Our music comes from everything-us clapping our hands to singing to playing on electronic instruments.  As electronic music grows, we’re going to continue to use it to our advantage and continue to push the boundaries.  Even back in the 60s, The Beatles used a Moog on the Abbey Road record.  They didn’t see boundaries.  That’s the beautiful thing about music.  People that don’t appreciate it don’t have to listen to it, there are so many other things out there for people to listen to, but to hate on a certain kind of music is ridiculous.  I don’t really even consider us a fully electronic sort of band, it’s kind of 50/50; there are so many organic instruments in our music, from guitars to piano to percussion to vocals, and we layer in electronic elements.  We never turn our noses up at an instrument.  If it can make a noise, we’re going to figure out how to use it.

Eo8:  For your live performances, is it only the two of you, or do you have other musicians accompany you?

SS:  We have an extremely talented drummer with us, it’s me on guitar and vocals, and Jesse on keys and backup vocals.  As time goes on we may add a more people. a horn section, who knows.  Like I said, we’re not trying to put any boundaries on this.  We want to continue to grow this thing and wherever it naturally goes, and we’re going to go with it.

Eo8:  Your debut EP, Prelude Of A Dream, comes out on June 30th, can you tell us about it?

SS: I (Adam) can actually remember the moment when I thought I wanted to do something along these lines; I was in our kitchen making breakfast, and Jesse was mixing two different songs together.  One of the songs was by The Glitch Mob and I looked at him and was like “what is that?” and he told me, and I was like “whoa, this is really cool.”  He was taking parts of songs and manipulating them, doing interesting things with them and at that point, I put down my spatula and picked up my guitar and we started to create something.  That night I wrote “Like An Animal.”  That was the beginning of us writing together.  We even worked on turning some of my older songs into Say Say songs.  The EP is the collection of music we were able to put together that reflected us at this very moment.

Eo8:  I know you probably feel like all the songs you’ve written are like your babies, but do you have a particular song that resonates with you more than the others?

SS:  I (Jesse) would say that “Turn Back Time” is my most favorite; it’s a newer one that we’ve done and that one’s really fun to play live.  It’s got unique dynamics to it.  “Running” is my second favorite.  I (Adam) think the one that speaks to me most is “Like An Animal” because that’s the first thing that kind of came to life, and we wouldn’t even be having this conversation or putting out this EP without that one.  A lot of things that happened around that song that have changed our lives.  It holds a special place in my heart.

Eo8:  Do you have any festivities planned for the release? Going on tour?

SS:  Stay tuned, we’ve got cool stuff planned, but we can’t say anything quite yet.  We hope to tour late summer/early fall.  We wanted to get the EP out first; we wanted to have a purpose for a tour.  You have to have something to leave behind, something for people to take with them that they can listen to later on.  We’ve almost avoided touring until we get the EP out.  If they like us somewhere, we’ll go.  All over the world.  And if they don’t like us somewhere, we’ll go there twice.

SS:  We set a lot of big goals for ourselves with this whole thing.  The goals don’t stop there though because we don’t know what’s going to happen, so it’s hard to say what the finish line will be.  You have to enjoy the journey, there’s no great finish line or destination.