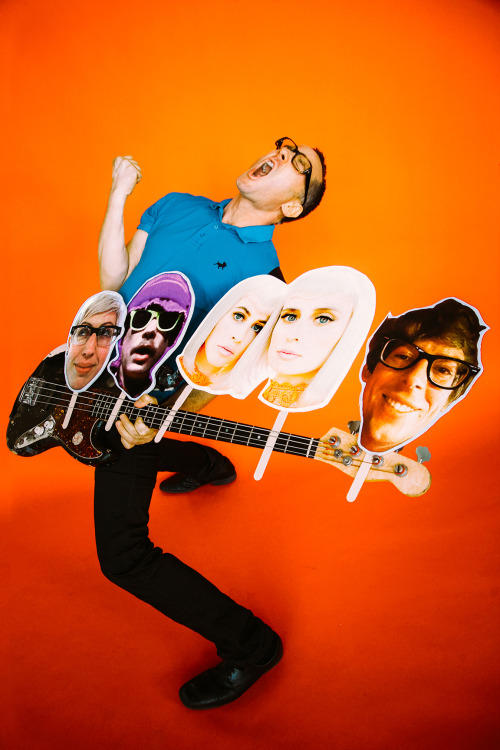 I asked Matt Sharp, former Weezer bassist and current frontman for The Rentals, where he was as we spoke the other day; “hey guys, does anybody know where we are?” he asked those on the 12-person tour bus being shared by The Rentals and Radiation City.  “We are in Oregon in the middle of a whole lot of pine trees,” he said.  That very bus will be making its way to Nashville in the next week because, lucky for us, The Rentals will be playing at the Mercy Lounge on Monday, May 25th.

The band is a musical collective formed in 1995 by Sharp; various members have come and gone, but Sharp is the constant.  The Lost In Alphaville lineup featured The Black Keys’ drummer Patrick Carney, Lucius’ Jess Wolfe and Holly Laessig on vocals, Ozma’s guitarist Ryen Slegr, and Lauren Chipman of The Section Quartet on viola and piano.  I asked how he chose the current lineup; “One thing I have a good understanding of is how much of an impact a single person can have, it’s chemistry, how one person can change the dynamic of everything,” said Sharp.  For the touring incarnation of the band, Sharp will be joined by Lauren Chipman, Ryen Slegr (Ozma), Shawn Glassford (STRFKR), Ted Gowans (Tegan and Sara), and Patti King and Lizzy Ellison (Radiation City). Sharp was hoping that Carney would be in town for the Nashville show and could come play with them, but “he’ll be in Barcelona, my home away from home,” he said.

Sharp is no stranger to Tennessee; many years ago, he picked up and moved here, living in basic seclusion in tiny Leiper’s Fork, Tennessee, an hour outside of Nashville, for several reasons, one of which was to work on music.  Horses would come to the door to greet him (Sharp befriended one in particular, an old work horse named Marshall), and he would dine at the two options in town, Puckett’s and The Country Boy. When he came back recently to record Patrick Carney’s drum parts for The Rentals’ latest album, 2014’s Lost In Alphaville, Sharp was amazed by how it had changed; “I mean, they even have vegetarian options at the local dive restaurant.”

Another reason for moving to Tennessee?  Sharp was suffering from a case of serious burn-out; between going on tour with Weezer, going to the studio with The Rentals, going to the studio with Weezer, and going on tour with The Rentals, he ran himself ragged and hit a wall.  During this time, Sharp was able to gain some perspective on his direction and what kind of music he really wanted create.  He had been working on music with Weezer and The Rentals that was aggressive and production-heavy, but when perusing his CD collection, Sharp realized he was mostly listening to the likes of Wille Nelson and Leonard Cohen, whose voices had to get through very little production in order to convey their stories; he resolved to make music like that.  Sharp says the most recent Rentals album, 2014’s Lost In Alphaville, is the closest that he’s come to that goal so far.  Does he worry about getting burned out again? “Never say never,” said Sharp, “but I’m not worried.  The busyness I’m experiencing now is nothing like the nonstop pace of the past.  I am not looking to recreate that at all.”

When discussing with me the ultimate goal for his music, Sharp said: “I’m hoping for the one thing I don’t have control over, which is that it connects with people in an emotional way.  That is the great mystery.  Why do certain things make you get connected? That’s the one thing that every artist is looking for, that emotional connection with people and that they are significant in that way.  When people will come out of nowhere and tell me ‘I got married in Barcelona because of your album’ or ‘that song is part of the soundtrack of our relationship,’ when people share that kind of stuff with me, I never take that for granted.”  At that point, it seemed like the perfect time for me to tell him that   Weezer’s Blue Album was a huge part of my musical formative years, and said that I would love to be able to go back and tell my fourteen-year-old self that one day I would have the chance to tell him thank you.  “That’s awesome is what that is,” Sharp said, “so cool.”