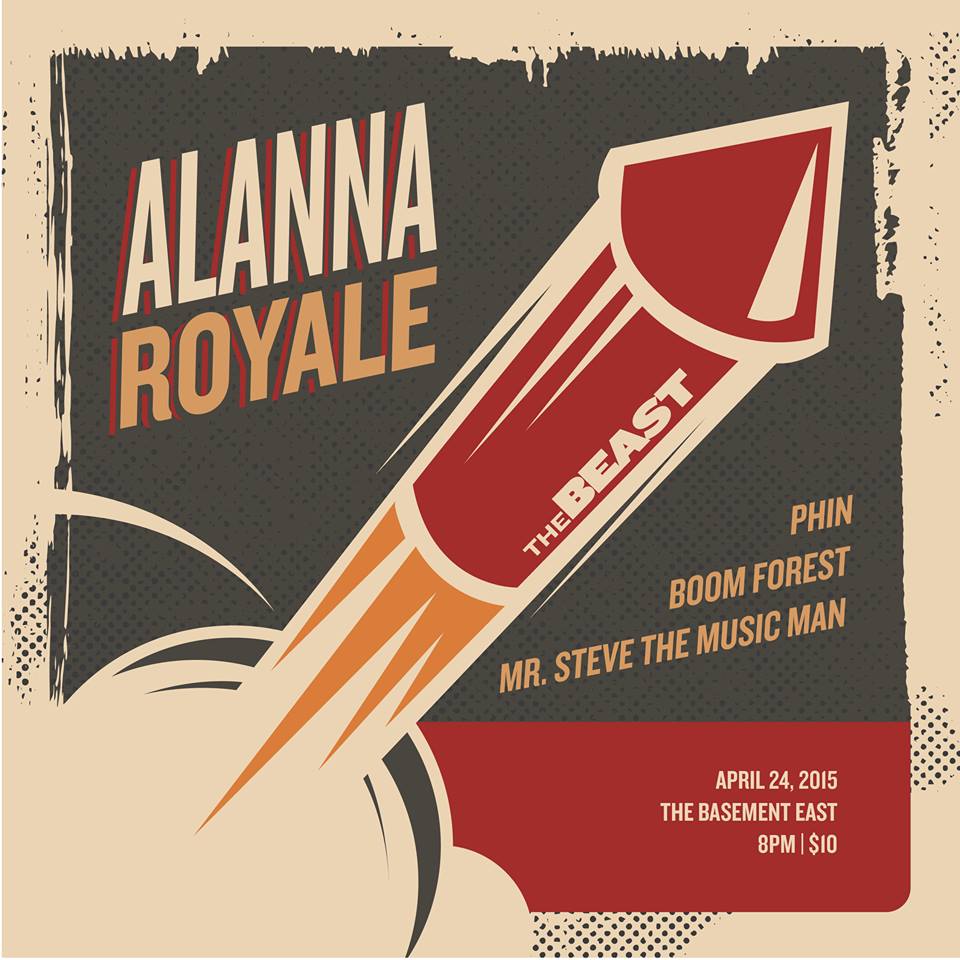 If you are familiar with Nashville, you’ve probably heard of Grimey’s, a.k.a. Grimey’s New and Preloved Music (owned and operated by Mike Grimes and Doyle Davis), my favorite local record store, located in a big, old, creaky house on 8th Avenue South…and if you’ve heard of Grimey’s, chances are you’ve heard of The Basement, the music venue located, well, in the cozy basement of that big, old, creaky house on 8th Avenue South.  The first show I ever wrote about I saw at The Basement, and this blog’s name is attributed to the the fact that 8th Avenue South is the epicenter of alternative and independent music here (think Third Man Records, Mercy Lounge, and Dan Auerbach’s recording studio, to name a few highlights).  It’s a Nashville institution, y’all.

This weekend marks the grand opening of The Basement East (“The Beast”) in East Nashville, the newest addition to mastermind Mike Grimes’ musical empire, and Nashville-based soul/funk band Alanna Royale will be headlining the grand opening this Friday night.  I had the chance to chat with Alanna about the show:

“Playing this show is very special for me because Mike (Grimes) and I are so close; I used to wait tables when I first moved here, and Mike would harass me and say “Boston Girl! When are you going to play my venue?”  I didn’t think I was good enough to play there, and I didn’t want to embarrass myself, but eventually, he wore me down, and I played my first Nashville show at The Basement.”

That first show was a success and Grimes booked her to headline at The Basement a few months later, telling her that that only thing that would keep him from being at that show was if his kid was born on that day, which actually ended up happening.  At the show, Alanna held up her phone and had the audience sing happy birthday to the baby; she sent the video to Grimes, and the rest is history.  “Mike respects me, and I totally respect him too.  One of the coolest things about The Basement is that Mike and Dave (Gehrke) are so respected by everyone in town.  They basically built East Nashville.  It’s kind of a homecoming.  I’m so honored, they’re like family to us.  It’s momentous.”

It’s also special for Alanna because her family will be here from New York, and they’ve never seen her band play before; you’ll be able to find them at the special V.I.P. table cheering her on.  She says the new venue is beautiful; it has a capacity for 400 people, green rooms for the bands, separate load-in entrances, a huge bar, and the lights and sound are incredible.  The Basement and The Basement East are also doing advanced ticketing, which is a huge change, and will be a total hit.

The Basement East is located at 917 Woodland Street in Nashville; the 21+ show starts at 8:00 p.m. and tickets are only $10!  If you can’t make it to see Alanna Royale this Friday, be sure to catch the band on their upcoming tour:

May 27 The HI-FI, Indianapolis, IN