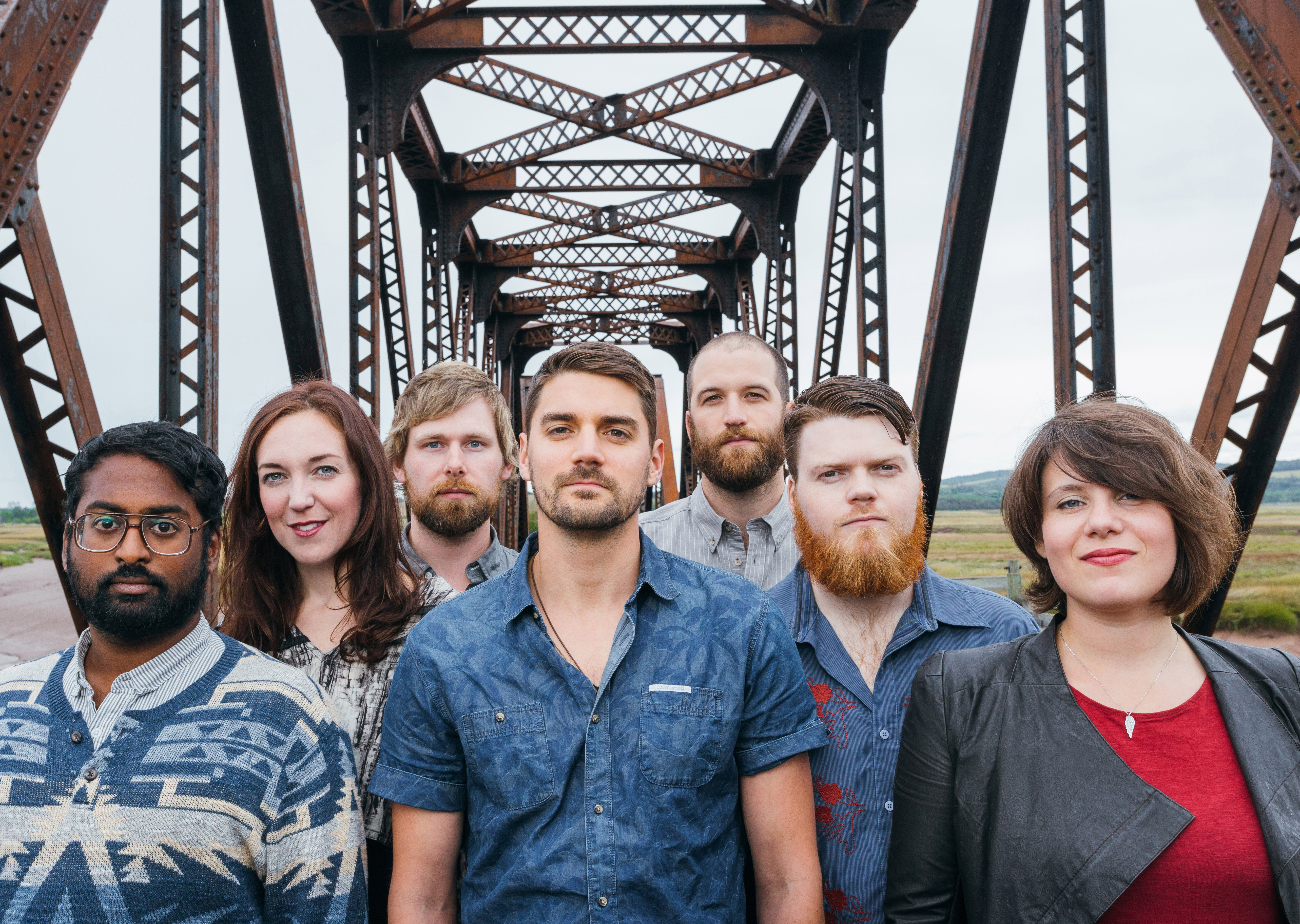 This Thursday night is the April installment of Communion Nashville, a monthly concert series that introduces music fans to up-and-coming artists.  Tennis, Seryn, *repeat repeat, and Vinyl Thief are all bands I first heard at a Communion night; they are bands I’ve ended up interviewing, writing about, or doing videos with, bands whose music has become part of the soundtrack of my life.  Needless to say, I have a sizable infatuation with Communion Nashville.

This month’s Communion features Canadian seven-piece indie band Hey Rosetta!, whose rich and lushly-layered music is obviously inspired by the beauty of Newfoundland’s coastal landscape.  I caught up with golden-voiced frontman Tim Baker recently about the band’s latest album, the short film they made on Newfoundland’s Fogo Island, and why cats make a great audience:

Eo8:  Your new album Second Sight came out this year; your last album came out three years ago, what has the band been up to in that period of time, and why was there such a long time between albums?

TB:  We were on the road quite a bit in 2011 and 2012, we’ve always been a touring band, since the very beginning.  Just by nature, where we’re from is very isolated and far away, the island of Newfoundland, it takes two days to get to the nearest city, so we would go out on the road and we’d stay out for like a month.  We’ve always been road dogs, sort of.  It’s a crazy life being on the road, it takes you over.  If you’re out for months at a time, you’re just sort of surviving out there.  When you come back it takes a little while to get back to yourself and get back to creating.  We stopped touring, had several months off in 2014; I did the bulk of the writing then, and we did the bulk of the arranging in the summer of 2014.  We take our time too, we’re not really a fast band, we like to take the songs and try everything, take each tune and try it the way I dreamed it when I wrote it, and if anyone has something they want to try, we’re a big band and we have to respect everyone’s ideas.

Eo8:  Are you the main songwriter, writing alone with everyone contributing to the arrangement? Is that your process?

TB:  That’s pretty much the process.  That’s the way it works best; there’s a lot of garbage you have to go through when you’re writing to get to the good stuff, you kind of have to go for it and play and sing all sorts of wacky stuff, words don’t makes sense sometimes.  I’m house-sitting right now and I’ve been singing a lot to the cats, they make a great audience.  Nobody can hear me, which I find very valuable.  Even after all these years, I still feel self-conscious about that; it’s like trying to meditate in a group.  It’s much easier meditating by yourself.  Things come to you that may not otherwise come to you when there’s no social pressure or any other kind of pressure.

Eo8:  I watched the short film that you made on Fogo Island, it was stunning, such an appropriate place for you to be performing and recording your music.  Can you talk about that experience?

TB:  That place is crazy beautiful, it’s magical.  We’d been hearing about it for a while, there are some really exciting things happening there now.  Newfoundland is very isolated, and Fogo Island is even more isolated, an island off an island.  People had been leaving there, the fisheries mostly dried up; there’s a woman who is from there but had moved to the mainland, she’d made a pile of money and brought it all back to the island, reinvesting it into ecotourism and artist studios.  The studios are  amazing spaces, all off the grid, elemental, and simple.  They’re Scandinavian-looking, but they’re all made with old traditional Newfoundland techniques.  We heard about it, and we wanted to check it out.  The spaces looked like they would, as you said,  really match the music and would heighten the performance of the songs there.  We wanted to go out and play them in these spaces, and record it and film it, so we did.  It was amazing.

Eo8: You’re headlining the Communion tour, and you’ll be in Nashville on April 16th; your touring schedule in general looks pretty intense.  How are you feeling about that?

TB:  I’m a little nervous about it, because I’ve done those schedules before and I know it’s not going to be easy.  At this point I think at least we all know what’s coming, and can brace ourselves for sleepless nights and for performances after those sleepless nights, which are hard.  It’s amazing what you can put your body through and still play an amazing show.  It all depends on the crowd.  If there are people giving you energy, then you can do it without sleep, night after night.  If there’s no one there, it’s tough.  So get the word out!  We need people there!

Eo8:  If folks can’t catch your shows on the Communion tour, what are your summer plans? I saw you’re playing festivals like Firefly and Shaky Knees…

TB:  I’m not really sure what else has been confirmed for the summer, but I do know it’s going to be a busy one.  We’ll be out at a lot of festivals.  I don’t think we’re doing Bonnaroo this year, we’ve done it a few years, love it.  We’ll be around in the summer and in the fall, it’s our big year of touring in the States.

Eo8:  How will you keep your sanity?

TB:  That’s a very good question.  I have no idea to be honest with you.  Just hope for the best I guess!  It’s going to be okay.  I’m sure I’ll be back here singing to the cats again at some point.

There you have it, beloved readers. Hey Rosetta! will be performing at Communion at Mercy Lounge THIS THURSDAY night  Kevin Garrett, Jeffrey James, and with East of 8th favorites The Soft White Sixties (**SWOON**).  Come out to the show on Thursday at Mercy Lounge (18+, doors at 7pm, show at 8pm, tickets are $10) or whenever Hey Rosetta! comes to your neighborhood.  They NEED us.  You heard it here first.

***Also, you should definitely check out the short film they did on Fogo Island called “Fogo Sessions,” it’s beautiful.***