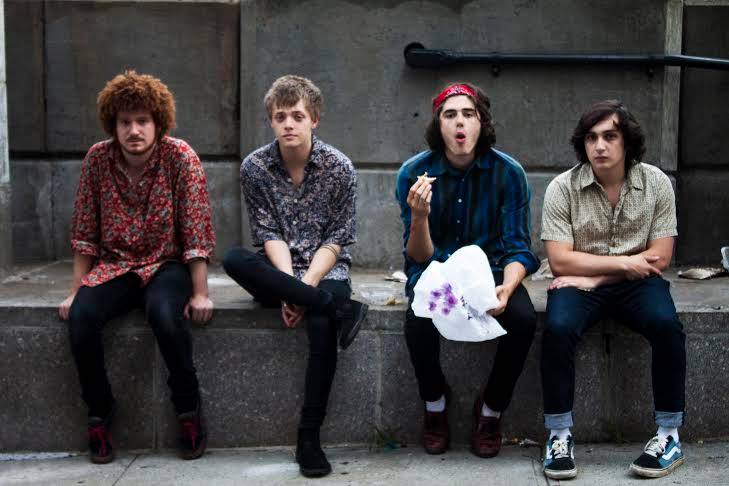 In case you aren’t aware, we are living in the middle of a beautiful time in the history of music; we can listen to whatever we want, whenever we want.  We have the control.  This new frontier of freedom in the digital age is precisely what enabled me to stumble across New York City band Active Bird  Community…I was introduced to their song “Mooncalf” while enjoying a random Spotify playlist.  I liked it so much, I added it to East of 8th’s main playlist, Indie Extravaganza (you should check it out!); the other day I was listening to my playlist and “Mooncalf” came up in the shuffle.  I then thought, “hmm, Active Bird Community, wonder what they’re up to these days?” so I clicked on their Spotify artist profile, and discovered that they have just released a delicious new self-titled EP!  “So Susan,” you’re asking, “who is Active Bird Community?”  Allow me to introduce you!

Carter McNeil, Andrew Wolfson, Tom D’Agustino, and Zach Slater started the band when they were 11 years old….YES, THAT’S 11 YEARS OLD….originally from Hastings-On-Hudson, New York (right outside the Big Apple), the band is a little spread out at the moment since they’ve gone to college (Andrew goes to SUNY-New Paltz, Tom goes to Fordham University in the Bronx, Carter lives in the Bronx, and Zach goes to school at Oberlin in Ohio), but they make it work.  According to Andrew, ABC’s lead guitarist, the band sees it as a chance to expand their venue options and an opportunity to make new fans.  They’ve been playing at colleges and at loads of house parties, which Andrew says is quite a different experience than the years spent playing shows in NYC venues: “we love playing NYC, but we’ve really enjoyed playing campuses and house parties lately, it’s more personal, really intimate and organic.”

The indie rockers have a full-length LP in the works with producer Christopher Daly at Salvation Recording Co. in New Paltz, New York, and are hoping to have a grand release and tour to support it this summer.  Until then, check out their music (there’s a link just for you below) and if you’re in or near the Bronx this weekend, they’ll be performing at Rodrigue’s at Fordham with Elvis Depressedly and Pile.

One thought on “WHO IS ACTIVE BIRD COMMUNITY?”