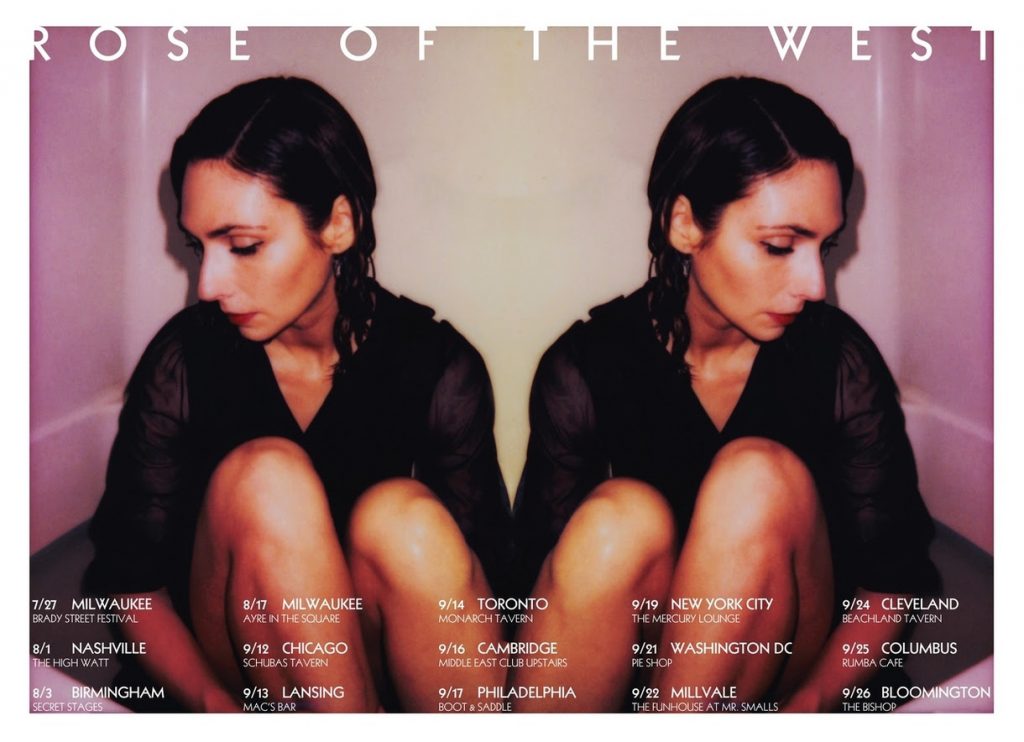 Sequestered in the desert of Western Australia, the vibrant, red flowers of Eucalyptus macrocarpa stand out against the harsh landscape. The rare tree, nicknamed “rose of the west,” manages to prevail over the severe climate, opening its beauty to those who seek it. It’s with this image that Gina Barrington (vocals, guitar) found solace and inspiration for her project Rose of the West, who will be performing at Nashville’s High Watt on Thursday, August 1st. After five years of false starts, the contemplative pop outfit has solidified its lineup and made its debut on April 5th, with the release of their eponymous LP via Communicating Vessels.

Barrington grew up in a musical household, as her grandfather was an orchestra director. She would begrudgingly sit in front of a piano for hours, longing to tinker around and write her own music, and above all work her way through her grandfather’s instrument hierarchy to earn her first guitar. And while the guitar was never reached, this foundation is what helped Barrington find her way back to music amidst life’s tribulations. “It gave me that space I needed, and encouragement I needed, to maybe just pick something up and see what would happen,” Barrington says. “It was an expression of that inner voice that you feel like getting out.”

After a six-year stint in Los Angeles, Barrington felt Milwaukee calling her home, and her writing began to truly take hold. After releasing a solo EP, she formed Nightgown in 2014, but interpersonal issues permeated the group, and she was left to reinvent. From its ashes came Rose of the West, a dark, dream-pop five-piece.

Rose of the West opens with “Love Lies Bleeding,” which like the band’s name, also draws on the rare beauty of an exotic plant. A hypnotic chorus narrates the universal experience of uncovering truth and gaining 20/20 hindsight. Barrington’s lush sound is bolstered by the musical backgrounds her band members have brought to Rose of the West: Cedric LeMoyne (Remy Zero, Alanis Morissette), Thomas Gilbert (GGOOLLDD), Erin Wolf (Hello Death) and Dave Power (The Staves). The album’s lead single, “Roads,” is a volatile display of the long journey Barrington had to embark on to arrive at Rose of the West. Barrington’s gritty vocals softly-yet-sternly navigate temperamental layers of synth and guitar, ultimately resolving atop an oscillating bassline.

“‘Roads’ is really about duality: feeling torn, lost, overwhelmed and scared about, yet enthralled with, the possibles in life,” Barrington says. “It’s one of the songs that’s been with me longest, and the first one that came together during the making of the album which pointed it, and the band, in its ultimate direction.” The road to Rose of the West has been lengthy and turbulent, but Barrington pressed on and has found her emotive, indie-pop voice.

And, just for you, beloved readers, Barrington has curated the “Heart And Soul Essentials Playlist” for your listening pleasure. “These songs and artists take us to the deep places we need to reach, to escape into,” she says of her choices. “Some of them shaped us in formative years, other more recent ones resonate heavily with what we love and do now. Had we never heard these artists our album would likely not exist.” Check out Rose of the West HERE. Click HERE for tickets and show information.

I Cover The Waterfront – Billie Holiday