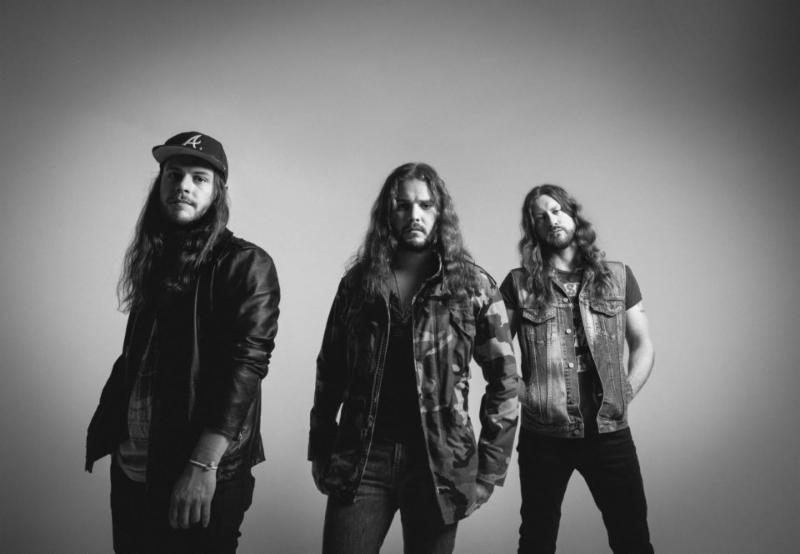 Volcanoes, earthquakes, tornadoes, and hurricanes have nothing on Nashville rock outfit Goodbye June; in the milliseconds that pass after pressing “play” on their forthcoming album, Magic Valley, rapid-fire snare hits ring out to introduce frenzied album opener “Bamboozler,” as Landon Milbourn’s scorching vocals erupt over the face-melting guitar stylings of his cousins, Brandon Qualkenbush and Tyler Baker. It’s refreshing really, their pure, unadulterated, razor-sharp rock n’ roll forged in the fire and delivered with a side of have mercy.

“We started working on this a few years back, before we really knew where we were going, getting our ducks in a row. It was a long process, we were getting antsy, but it was a necessary thing. It allowed us to make a beautiful album that represents our youth and our rock n’ roll side,” explains Milbourn. “We wanted to create something that was, no pun intended, magical, and something from start to finish would engage the listener.” “We still believe in full-length records, we want to paint a complete picture, not just drop a single,” continues Qualkenbush. “It needs to be an entire experience, like how our heroes would do. We’ve always had that mentality; we released an EP first that led up to this record. We like to go against the grain. We don’t believe in using tracks during live performances. We are against what’s popular. We want to pay homage to the greats. We don’t want to be a bubble gum, candy band.” “While we do love bubble gum and candy, we wouldn’t use those word to describe our music,” Milbourn adds with a laugh.

“Some of these songs were written four years ago; they represent a wide range of emotions during this entire process,” recalls Qualkenbush. “Frustration with where we were in our career to dealing emotionally with things we were going through at the time, like leaving our faith, that was a really hard time for us. The track ‘Fear Of Jesus’ is a perfect example of that. We were frustrated with the climate of the music industry, because all these rock bands around us were dropping like flies and going country, God bless them. You can hear that frustration and anger in the record.” “We cast a wide net,” continues Milbourn. “There’s some heartache in there, but there are songs like ‘Riding’ and ‘Charge Up The Power’ that talk about empowerment and building people up and creating unity.”

The band credits Nashville producer Paul Moak with filtering their ideas and creating a cohesive body of work. “We’d never done any co-writes with anyone else in the past, it had very much just been the three of us writing together, nobody else got in the mix,” says Milbourn. “Paul was the first person we ever co-wrote a song with, ever. I remember the first day we walked into his studio—we fell in love with him and we fell in love with the space. We ended up writing ‘Daisy’ the very first time we hung out with him. We all knew it clicked and that the four of us could make good music together,” he adds. “He definitely made a good impact on the music.”

Goodbye June will release Magic Valley on May 5th via Interscope Records; before ramping up their co-headlining national tour with Los Angeles-based rockers Badflower, the trio is preparing to blow the roof off of The Basement East with a celebratory show on the evening of the record’s release. “We love playing for the hometown. People say Nashville is a tough town to make it in, but we’ve had so much support since we’ve been here,” Qualkenbush says. “We love it here.”

May 5 – Nashville, TN @ The Basement East