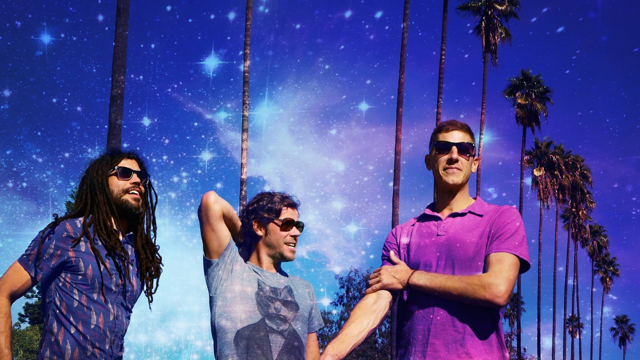 Lifelong friends from south Florida, Jutty Taylor, Ryan Malina, and Julien Bellin, each a professional touring musician in his own right, had always helped each other on their respective projects—The Very Best, Natalie Walker, and Western Lows, amongst others—until one fateful night during a jam session in a dimly-lit practice space in their current homebase, Los Angeles.

“We met up to play, with no agenda,” says Taylor. “We got some crude phone recordings of our free-form jams, and the music came together in a spontaneous way.” It was then, the trio decided to form a band, and Greyface was born. “This was officially the three of us deciding to go in on something equally,” he reveals. “It’s been a long time in the making.”

On February 10th, Greyface will release their debut album, Greyola, featuring streamlined  classic indie rock versions of those early jams. “I was between a rock and a hard place emotionally, and that informed the subject matter of the songs,” recalls Taylor. “We all came up with things individually; the riff for ‘What Did You Lose’ came to Ryan in the shower after he had taken edibles, which is shocking and appalling,” he adds with a laugh and a wink in his voice. “I wasn’t there in the shower with him though, for obvious reasons.”

“Overall, the process was harrowing for Ryan, as he assumed production duties,” he adds of the recording process. “He’s our secret weapon, and he was responsible for making it sound like a real thing with no budget. We recorded the drum tracks in the studio where ‘We Are The World’ was made, while the vocals and guitars were bedroom recordings. My part was way fun; I feel like I have the best job in the band. I get to go into fairyland and shape stories—not on edibles, of course—and I have this amazing support from my bandmates, who indulge me,” he explains. “Julian is such a good sport, he’s so calm and shames us out of our anxiety. It was very fun.”

With their project on the rise and an album under their proverbial belts, Greyface is looking toward the future with music anticipation, with plans to tour in support of Greyola this summer. “We’re really proud of it, and we have big plans,” declares Taylor. “We can’t wait.”