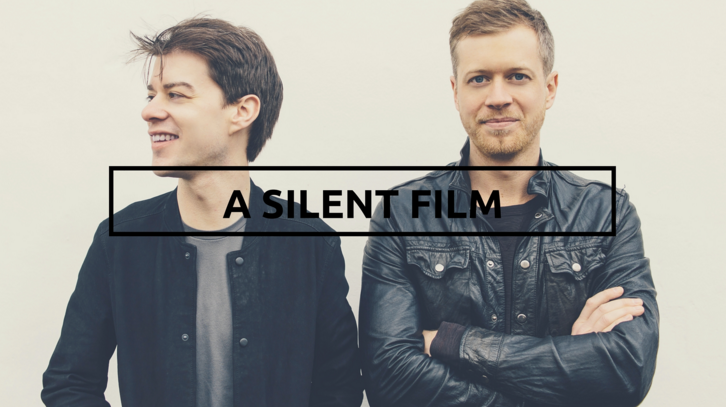 Recently, Spencer Walker, drum master of British poetic pop-rock band A Silent Film, announced that the duo was going on tour this summer, and better yet, that they were also planning to finally get to the bottom of life’s greatest mystery—who is more looked down upon, drummers or bass players? As a player of the great bass myself, I was intrigued, and asked them about it. “Robert gets to live the frontman life, and I’m sort of cleaning up for him and cooking for him, fetching his mail, I play a subservient role,” sighs Walker. “I can always get a drum machine, you know,” declares above-mentioned frontman Robert Stevenson. “See?” implores Walker. “We drummers are a dying breed.”

A chat with this pair is like observing improv comedy, and their chemistry with each other is obvious. As they prepare for tour, A Silent Film has decided to get lost in the States to work on new music. “We’ve spent a lot of time in different places here, we’ve done a lot of writing in the Arizona desert,” recalls Stevenson. “We even did a session on a mountain in Colorado.” “I wanted to be by a lake in the woods, that was my specific dream. We dropped a pin on a map in the area where we could find a cabin by a lake, and that was Tennessee!” exclaims Walker. Thats’ right, A Silent Film has been in the middle of somewhere in the Volunteer State for ten days to work on pre-production for the next record; while they aren’t playing in Nashville on this tour, Tennessee is going to be a big part of what their next album will become.

“We found a log cabin by a lake, surrounded by trees, there are no distractions, there’s no wi-fi, we’re going rural,” says Stevenson, emphasizing the word’s two distinct syllables in his lovely British accent. “We’re going to bring our gear to the cabin and bash out a few songs. It’s less about recording, more about getting new flavors for the new album.” While on the west coast, A Silent Film will join alt-rockers Silversun Pickups for several shows; on the east coast and midwest legs of the upcoming tour, the pair have booked shows in intimate venues, which they believe helps them connect with audiences more closely, and is more conducive to road-testing new music. “Honestly, if people want to help write this next album, they should come out to the shows and tell us if they like the new songs or not,” says Stevenson, as Walker adds, “Yes, and they should scream. A lot.” Don’t worry though, they promise to play their older hits on this tour as well.

Even after a decade of making music together, the band always brings a fresh approach to what they do. “We grew up being inspired by artists who weren’t afraid to change; that’s something we’ve always tried to do too, we don’t approach making music with the attitude of ‘let’s remake what was good not the last album,’ we do whatever we feel we want to do with that new album. That’s how we stay fresh, we make the music we want to make at that time,” explains Walker.

“We get to play our music for people all over the world; it’s a childhood dream, it’s amazing. Anyone who takes that for granted and manages to get bored is, in themselves, boring. We are hugely grateful to our fans and we are very proud of what we’ve achieved,” adds Stevenson. “We genuinely love getting to a city, playing a show and hopefully doing something important for somebody there.”