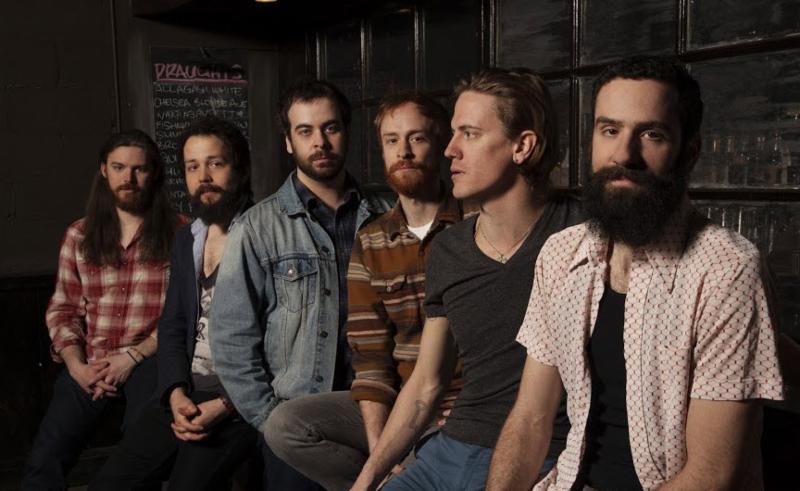 Crowded around a small coffee shop table with 5 of the 6 members of Brooklyn-based rockicana band The Hollows, I noticed that this was indeed a group of individuals as different as the beverages they had ordered at the counter.

Comprised mostly of college friends with backgrounds in theater, The Hollows formed in 2009; making their motto “Together, together”, and taking their cues from the organizational styles embraced by the theater world and by iconic outfits like Levon Helms’ The Band, The Hollows operate like a company—with four of the six members writing the songs and sharing lead vocals, switching up instrument duties, and each using all of their skills to make the band stronger, whether those skills are music-related or not. For example, when their brand new tour van required special cargo holds and compartments to suit their needs, bassist Jeffrey Kurtze put his talents to work to accomplish the build-out. “I’m a carpenter; one of my earliest memories is hammering two boards together with a nail,” he says.

The Hollows released a new full length album, Between the Water and the Wonder Wheel, on June 3rd, and have embarked on their first national tour taking their brand of roots music, to which they laughingly refer as “junkyard rock”, to the rest of the country. With influences that range from Neil Young to Enya (yes, Enya), and four lead singers, the listener enjoys a nice variety, and you’re as likely to hear fuzzy guitar as you are to hear banjo. “We came up right when the pop Americana scene got bigger, because of bands like Dawes and Mumford & Sons. For the first two years—not to speak ill of Mumford & Sons—but I wanted to punch somebody every time I heard ‘You have a banjo in your band? You must be like Mumford & Sons’, says keys player David Paarlberg with a laugh. “I think we’ve carved out our own space, it’s got grit to it. I don’t feel like anyone is doing what we’re doing. It’s roots rock on the surface that does a lot of genre-hopping at its core.”  “There was never really a discussion about how we were going to sound,” says banjo player Daniel Kwiatkowski. “We each play different and overlapping instruments, and we’re still excited about what we’re singing about after all these years. Our goal is to tell good stories that inspire other people.” Making the new record was a painstaking process, but one well worth the effort and extra elbow grease. “This album has a wide appeal—from Brooklyn hipsters to hardcore country fans in the middle of the States,” says drummer Justin Aaronson. “It’s very American, from the heartland…of New York City.”

The members wholeheartedly agree that New York is the perfect incubator for what they’re doing; “Being in New York provides a lot of stimuli, its energy is inspiring. It makes me dream about places that aren’t New York,” laughs guitarist Erik Saxvik. “Even the thought of leaving New York would be devastating,” adds Kwiatkowski. “We have so much support there.”

They also agree that the best part of it all is traveling and performing for different audiences, and connecting with so many new people. “I get a little crazy on stage; I run into everyone. Last time I jumped around, I stepped on my glasses,” laughs Kwiatkowski, as he holds up his mangled glasses with temples falling askew. Somehow, they still attach nicely to his friendly face. “I hope our music reaches people, and touches them in some way, even if it’s only one part of one lyric in one song. That’s the whole goal, to share your soul with the audience; we want it to make you feel something, whether we’re playing it in front of you or if we coming through your car speakers or your earbuds,” says Paarlberg.

“We really enjoy being around and meeting people. We give good hugs! Moms and dads love us,” he adds. “And grandmas too.”

Purchase Between the Water and the Wonder Wheel: https://itunes.apple.com/us/album/between-water-wonder-wheel/id1111958960