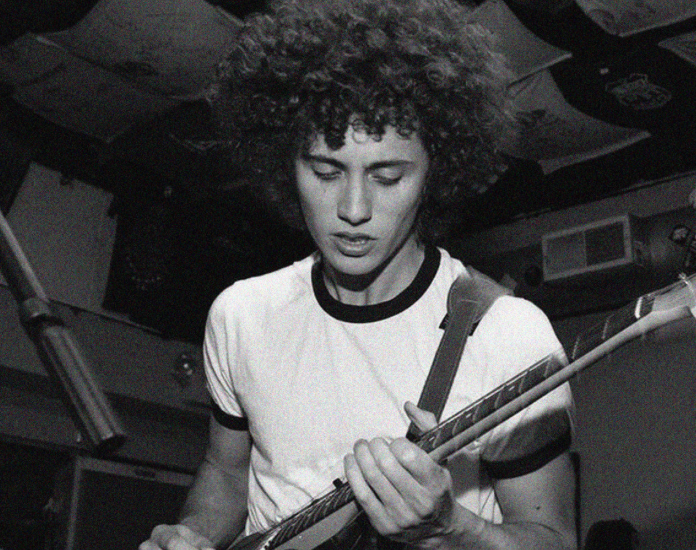 On January 2nd, Philadelphia-based rocker Ron Gallo relocated himself, his guitar, his big curly hair, and his viscerally frenetic musical style to Nashville; “It was something I’d been thinking about for a while. I really needed break out of the comfort of where I’d lived forever and get here. I’ve been playing here for years, and I love the weirdo, underground rock scene that’s happening here now. It’s less obvious Nashville stuff, it’s not what people think of when they think of Nashville,” he says of his new hometown. “I love it here.”

Gallo runs his own record label, American Diamond, from his room; its mission statement—“Rock and Roll Isn’t Dead. You Are” is more like a mission manifesto. “It sums up everything I’ve been saying. It’s like everyone’s asleep these days, we’re all distracted, we’ve become drones, looking at screens, not thinking for ourselves. We are the problem, we just need to take responsibility and go forward. I think it’s weird that more people don’t have something to say. For me, it comes from a a pissed-off place, a place of darkness presented in a constructive way, and still in good humor,” he says with a laugh. “I’m trying to assault humanity, it’s the only thing I really get excited about anymore.”

And let’s be frank, just a cursory glance at today’s cultural state could rock even the calmest person’s emotional boat. “If you look around, it’s all there. The state of our cutlure, music, and even food, the internet, all the things that make up the American lifestyle, there’s just a lot of bullshit in it,” he declares. “It’s hard to hack away and find the truth in it all. I have this thing against the medicated, run-from-things kind of culture we hide in. Now, more than ever, there’s so much to talk about. We can stand back and watch it all fall apart, or we can try to use the platform to wake people up.”

A conversation with Ron Gallo makes you grateful for a revolutionary spirit, and grateful to be reminded of the fact that we, as consumers, have the freedom to effect change. “It’s weird that people don’t realize the power they have; they’re okay being told how they do things and how they should feel, when in reality, we have control over that stuff,” says Gallo. “You’ve got to dig deeper, because the music we’re handed is mindless garbage. I don’t want to sound curmudgeon-y, but it’s unfortunate. Rock n’ roll isn’t dead, you just have to dig deeper to find the good stuff. If what I do resonates with people to the point that it excites them to do something, I’m happy with that. I’m just doing what I’m passionate about.”

Be on the lookout for Gallo’s forthcoming album, HEAVY META, and be sure to catch him on tour, playing shows and festivals around the midwest and the northeast through July.