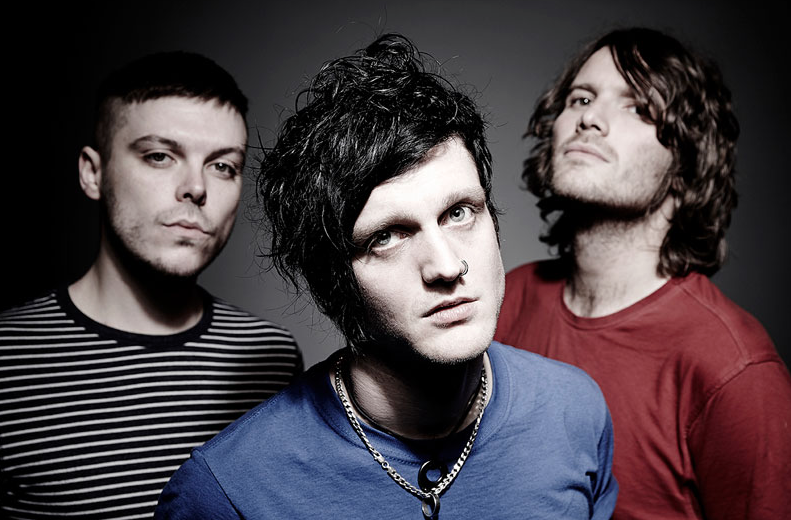 In the shadow of the bustling metropolis of Manchester in North West England, sits Macclesfield, a quiet borough on the River Bolin, known for its textile and pharmaceutical industries—and seemingly, its ability to produce talented musicians and rock bands; Ian Curtis, the late lead singer of Joy Division, Stephen Morris, drummer for Joy Division and New Order, and pop band The 1975.  Macclesfield is also home to burgeoning three-piece alt-rock outfit The Virginmarys.

Comprised of Ally Dickaty (lead vocals, guitar), Danny Dolan (drums), and Matt Rose (bass, vocals), friends who initially got together to jam, the trio discovered that they had something special, and began to write songs.  “We hit the road, and made fans the old-fashioned way, really,” says Dickaty with a laugh.

The trio released their fiery second full-length album, Divides, produced by Gil Norton (Patti Smith, Pixies, The Foo Fighters) in May via Wind-Up Records. “It was a dream come true to work with Gil.  It took about two months to record,” recalls Dickaty.  “He was so thorough and made sure we captured the best of every song.”  Divides has garnered serious buzz, and is home to single “Motherless Land”, which now has over 1 million Spotify streams.  “It’s an amazing feeling.  You don’t really think about that when you’re writing a song, you’re just trying to write a song you’re happy with,” he says. “It’s surreal to know that many people have heard your music.”

Divides is also home to serious subject matter—broken dreams, lack of trust in corporate authority, and the hardship of daily life, delivered in snarling punk-rock fashion.  “It’s a look at the world I’m living in at the moment,” Dickaty explains.  “I’m always writing songs that come from the heart and the emotions and feelings I have inside—I see the constant struggle that people are going through and how it seems okay for folks to be starving to death in the streets while the powers that be have more money than anyone would ever need.”

“The corruption that’s reported daily is insane,” he continues.  “Huge corporations don’t pay their taxes, and in our country, to make up for the deficit, disability benefits get cut.  There are cases reported of people that just can’t face it, they’re committing suicide, they’re dying from heart attacks because of the stress.  In the grand scheme of things, the injustice of it all, it just seems evil.”

Dickaty doesn’t claim to have the solution—the goal here is to spark awareness. “We want to inspire people, to give people a shiver down their spines.  We’re not preaching any answers, we just want to make people aware and make them question what’s going on.  Everyone has an instinct that they’re born with about what’s right and wrong,” he says. “They can agree or disagree, but we want people to think about it.”