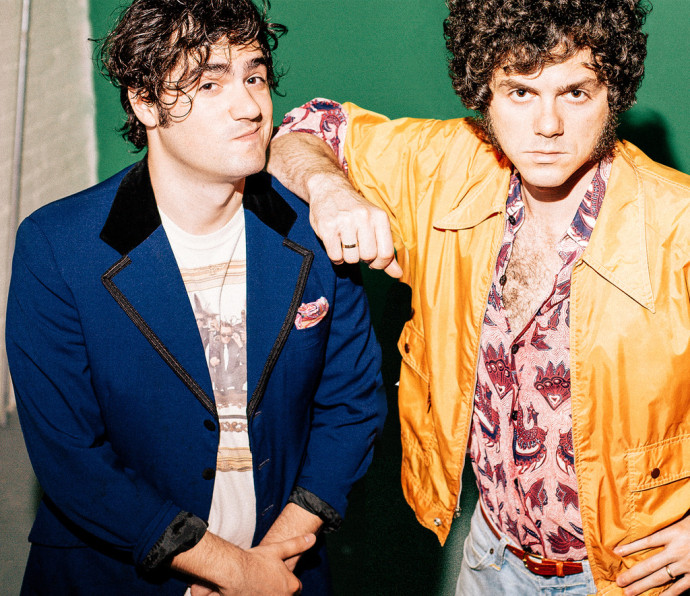 In the late 80s-early 90s, a genre called New Jack Swing burst onto the music scene; fusing older styles of R&B and swing-y jazz with newer pop production and sensibilities, the genre was made popular by the likes of Janet Jackson, Teddy RIley, and Bobby Brown.  “But Susan,” you ask, “What’s with the history lesson?”  Y’all, meet French Horn Rebellion, who have brought the genre into the 21st century and put their own funky electro-pop spin on it all—and they call it Next Jack Swing.

The duo is comprised of Wisconsin-bred Brooklyn-based brothers Robert and David Perlick-Molinari, who are in the midst of touring and working on their next release.  I had the chance to catch up with Robert (who has THE BEST sense of humor) on the way to cover Savannah Stopover Music Festival (at which they were also appearing):

Me: I’m really digging your music!

He: Why thank you! We’re actually working on our next album at the moment.

Me: Does it have a name yet?

He:  Well, actually, it doesn’t yet, we’re still tossing names around.

Me: I think you should name it “Susan”.

He: You know, I’ve never thought giving a record a person’s name before, but that’s a great idea.  You might be onto something.

The brothers are, like yours truly, former band geeks—Robert is a classically trained on…you guessed it, the french horn, and David (nicknamed “Stoner Dave”, not because of what you might think, but because he always fell asleep in band class) dazzled on the bassoon.  These days, David is a synth-tactic beat-maker and sought-after music producer, and Robert provides the band’s vocals and figures out creative ways to give the french horn cameo appearances in their infectious music.  “I didn’t feel like I fit into the classical music scene.  I wanted to show that french horn could have another life, that it wasn’t constrained to classical music.  So we rebelled and did something different,” Robert says with a laugh.

If you haven’t listened to French Horn Rebellion, you haven’t lived.  The band is on tour with Mystery Skulls until mid-April, but keep your eyes trained on their social media for tour updates.  Until the band releases their next album, Susan (one can dream, right?), check out their latest album, 2015’s Foolin’ Around: