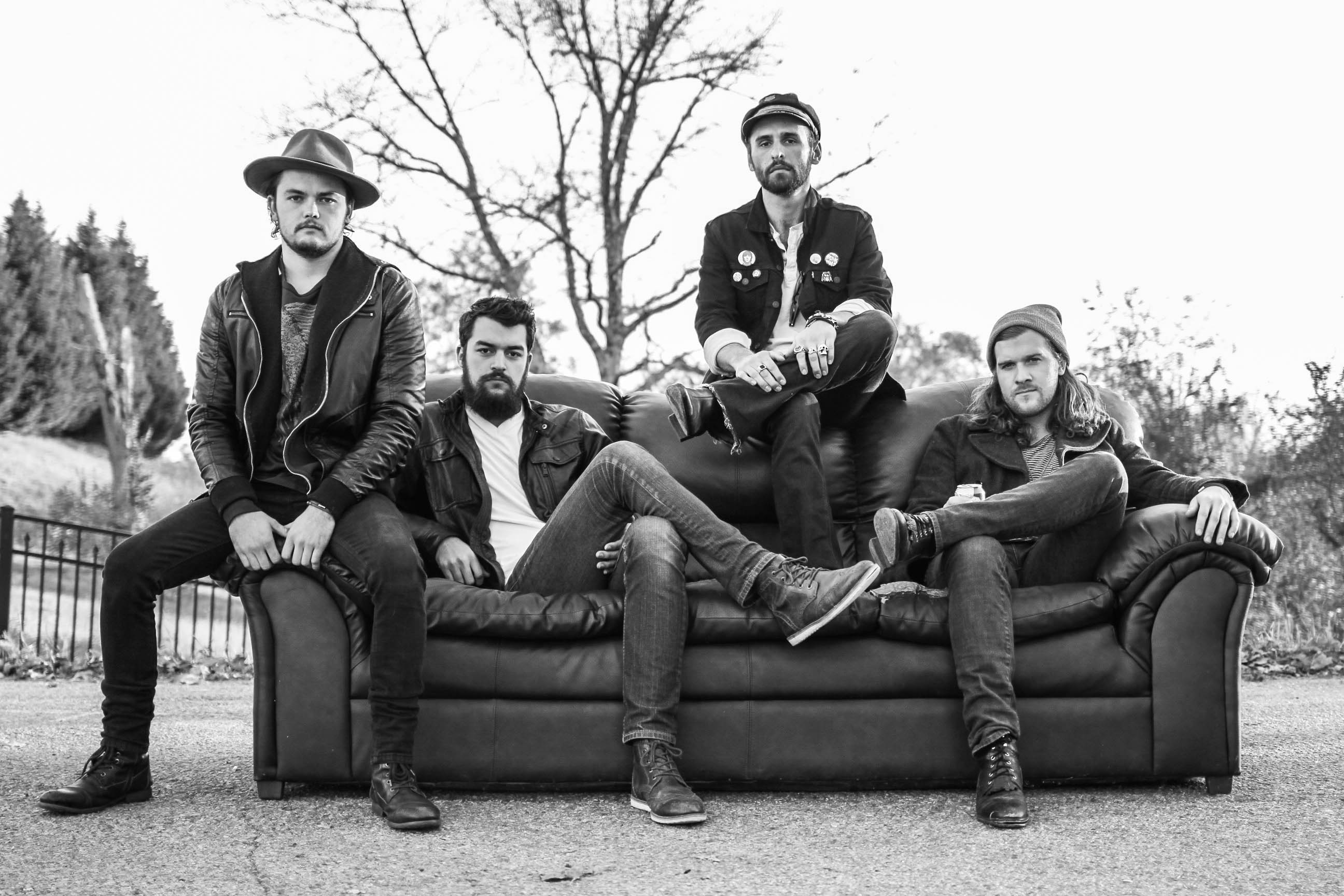 “Just to walk out on that stage was wild, to have that experience in a local setting instead of being out on the road.  The crowd was roaring.  They didn’t know us, they were just excited to be at that show,” says Austin McCool, guitarist for Nashville rock outfit Future Thieves, of the band’s recent performance in front of a sold-out crowd at War Memorial Auditorium.  Sitting around a rough-hewn table at local caffeine haven 8th & Roast, McCool, along with Nick Goss (bass) and Gianni Gibson (drums), all nodded in agreement that the experience had been one of their most exciting yet.  That is saying a lot for this crew, who has performed at Bonnaroo, Summerfest, and Live On The Green.  “My mother almost got kicked out of the venue for raging too hard,” recalls Gibson with a laugh.

Future Thieves, a band still relatively in its infancy, released their debut album, Horizon Line, in October 2015 to rave reviews.  “We have have so many influences.  Nick and I are into rock and metal. Austin loves alternative rock, I love jazz and blues. Elliot (Collett) did the alt-country thing for a while. We have a core group of bands that we all really like, like Delta Spirit, Kings of Leon,  Local Natives, and Rayland Baxter,” explains Gibson of the group’s sound.  “The weird mix of all that stuff, the four pieces of the puzzle, it all works.”

It works because there is friendship behind this foursome; “We were all friends before we were a band. We already knew what kind of music everyone liked, we knew everyone’s personalities.  Austin and I knew each other from 6th to 17th grade,” laughs Goss,  “We were all sponges with each other when we started playing together.  It’s been super easy.”

McCool and Goss grew up in Indiana together, and both found themselves in the Music City after graduating from Purdue University.  The pair met singer Collett at work, and shortly thereafter met drummer Gibson; the product of a music industry family who grew up on the beaches of the Los Angeles area, Gibson made the move to Nashville because, as he puts it, “this is where music is happening now.  The cool thing about Nashville is, everyone is genuinely trying to do the same things, and you want to see your friends, peers, and colleagues succeed.  When we get an opportunity like the War Memorial show, our friends are happy for us and congratulate us.”  “There are so many people here trying to make it in so many different ways, it’s not just a bunch of bands.  It’s great place to be a musician,” adds Goss.

The band is already halfway through writing their next album, and decided to lock themselves in a cabin outside of town to work on it. “For the first album, we were touring while we were writing and recording, so we decided to close ourselves off for this one,” explains Goss.  They’re also ready to tear up the highways on tour; “We travel and sleep in the van.  Sleeping in a Walmart parking lot and eating $40.00 of Taco Bell food at 4:00 in the morning is an experience,” says Gibson with a laugh.  “We have a clothes rack in the back of the van, and me and Nick had to sleep with our heads underneath it on our last run.  We would wake up with a face full of stinky, smokey leather every morning,” says McCool.  “I woke up one morning basically eating a leather jacket.  But we love it.  When you make it to the venue, you wake up as fast as possible, you hit the stage, and you’re your most raw self,” adds Goss.  “We perform every show with the same intensity and dedication, regardless of whether we just drove 40 hours straight and we smell,” declares Gibson.

Future Thieves will be performing at  Kimbro’s Café in Franklin, Tennessee on Friday, February 26th, at The Family Wash in East Nashville on March 7th, before heading to New York City to play with Humming House at Rockwood Music Hall, and then touring around the northeast; they have also been asked to appear at the Forecastle Music Festival in Louisville this summer.  Gibson says that they’ve started seeing familiar faces at shows, some even driving from other states to see them play. “We’re trying to keep the momentum going, turning the snowflake into an avalanche,” says Gibson.  “We’re so thankful for everything that’s happened.”