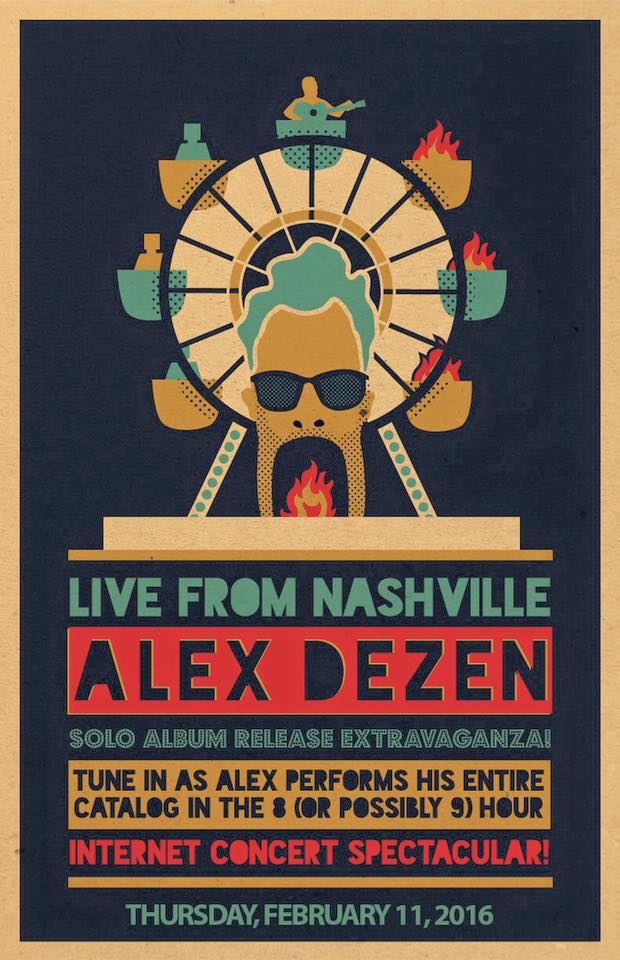 “It’s not enough to play for 9 hours straight, it has to be in a bunch of different locations,” says prolific songcrafter Alex Dezen of his plan to play his entire 115-song catalog all over Nashville on Thursday, February 11th.  Dezen’s new self-titled solo album is set for release on February 12th via Rock Ridge Music; he will finish his intra-city tour with a show at local venue The High Watt, playing the new album from cover to cover.

So, why did he decide to unveil his latest album in this unique way? “I read this interview with Bob Schneider late last year, and he did this 12-hour concert where he played in 2-hour slots and sold tickets to each.  There were no repeats, and he played for 12 hours.  When someone asked him why he decided to do it, his replied ‘To see if I could.’  There’s a certain point where you’ve created a body of work, and people can say whatever they want about its quality, but its quantity is undeniable,” explains Dezen.  “I thought it seemed like a cool challenge, and I like challenges like that.  Nashville’s become a hub of new American music, there are a lot of different bands and artists coming out of Nashville, which is also the country music center of the world.  Now it’s breathing new life into American music, which is in desperate shape. I have a lot of friends there, and I thought it would be cool to do a record release show somewhere else, instead of where I live, in L.A.”

The festivities begin at 10:30 a.m. at Made In Network, located at 613 Ewing Avenue.  Dezen will make his way to local independent radio station Lightning 100 for an interview and performance at 1:00 p.m., to Carter Vintage Guitars on 8th Avenue for a two-hour show at 3:00 p.m., and will stop at Razor & Tie Studios on 8th Avenue at 7:00 p.m.  At 9:30 p.m., Dezen will finish with a show at The High Watt.  He will play the songs in chronological order—“Beginning with the hand-printed CD that I released and sold at shows 17 years ago, and the last song of the night  will probably be the last song on the new record.  I’ll play some older stuff at the High Watt too,” he says.  The entire event will be streamed live on YouTube, and fans who attend the High Watt show will be able to pick up a copy of the new album a day before its release.

“I’m nervous about the normal things, endurance, will my voice die out at some point, those kinds of things.  Today I’ve been running over the set and I’m at about hour 6, and my certainly voice feels a little tired, but it does this weird thing, from so many years of playing rock n’ roll and trying to sing over loud drums and guitars, it gets a little stronger as it grades.  There’s a sweet spot that it hits around hour 6 where it’s really strong and it’s no longer relying on the techniques you should be using when you’re singing.  At that point, I’m just going for it.  I hope I don’t completely destroy myself before we get to the High Watt show.  I don’t know what’s going to happen.  I’m sure I’ll screw up at least one song, if not more. That chaotic element is kind of exciting to me.”