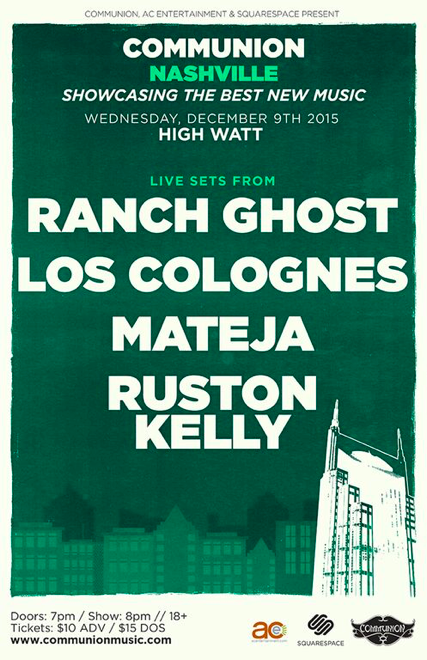 The noise that emanates from Ranch Ghost is heavily reliant on the vibe. Imagine that lone, solitary man on the front porch in Mississippi, playing only for the God within and around, suddenly splitting open – wild with color – Think Blind Willie McTell giving Ray Charles an Indian rug burn and The Kinks bleeding all over them. This should give you a good sense of what it’s like to hear Ranch Ghost.

About three seconds into opening track “Baby, You Can’t Have Both,” with its playful, dancing piano and guitar lines, Los Colognes announce the intention of new album ‘Dos.’ Influences ranging from JJ Cale, the live Dead, and Dire Straits are all worn proudly, with its six members, and particularly the core songwriting duo of drummer Aaron “Mort” Mortenson and guitarist/vocalist Jay Rutherford, making jam music for fans of songwriters, classic rock for a younger generation.

Starting in late 2013, Micah Kolk picked up and moved to Nashville in the pursuit of making music his career. With the help of Brett Moore (The Apache Relay), he recorded his first EP under the name “Mateja”. This debut self-titled album clearly reflects Kolk’s passion, energy and musical ability. From the opening track, the listener is captivated; quickly discovering he or she will not grow tired of the dark, yet beautiful sound with his effortless voice placed in front of melodic instrumentation. This unique and accessible sound stands on its own.

Ruston Kelly is a “hot” Nashville songwriter, who as it turns out, may be an even hotter artist. In the past 2 years, he has amassed an impressive catalog of cuts including tracks for Kenny Chesney, Blake Shelton, Eli Young Band and Tim McGraw’s single “Nashville Without You.” Sure, Ruston can write a “country” song, however, he has also created a personal sound which embodies indie, folk and rock – that when paired with his raw and honest lyrics makes for something different altogether. A captivating performer, his knack for storytelling along with his melodic vocal control seems to leave audiences in awe. He’s shared this gift on tour with artists including Robert Earl Keen, The Oh Hellos, and The Lumineers, and at festivals such as Bonnaroo and Wakarusa.

“But Susan,” you say, “it’s so close to Christmas and I have zero dollars left to spend on show tickets.”  Well beloved readers, I just so happen to have a pair of tickets to give away, and this show is gonna be goooooooood.  The giveaway will end at 5pm CST on Monday, December 6th…enter here, and you just might be the lucky winner!