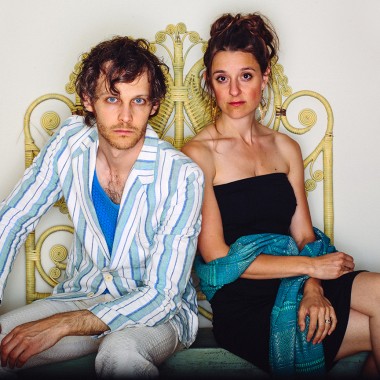 Not long after their recent and highly-acclaimed performance at AmericanaFest this year, Charlottesville, Virginia-based Mexo-Americana band David Wax Museum will be bringing their amazing folk sound back to the Music City this evening, with another blog favorite and modern folk maestro, Anthony D’Amato, along for support.  The band’s been on tour promoting their album, Guesthouse, released in October; “We’ve got a new band lineup, the tour’s been going great.  It’s really inspiring, they’re a great group of guys.  There’s a really high level of musicianship; they truly understand the music, they’re all quick learners who all have a really unique style, but not in a way that detracts form the overall vibe of the band.  It’s pretty special to find players like that, who have a unique style but that can really fit in with the sonic landscape of the band,” says frontman and co-founder David Wax.

Unique style is what defines this band: beginning in 2001, Wax, who was in college in Boston, spent summers in Mexico doing volunteer work, and became enamored with Mexican folk music. “It’s just got really exciting rhythms, syncopated 6/8 rhythms that are a lot more invigorating to me than that traditional Americana 4/4 country kind of feel. It’s stuff that makes you want to move in a different way.  I was also seeing folk music in a context where it still felt like a vital part of community life, and to get to witness and be a part of a folk scene where it felt so alive, it was a real turning point for me as a musician, it was certain kind of energy, a certain kind of model, that music can be done in this way.  It was illuminating. I didn’t have a vision of learning the music, I just became a fan.  Later, when I graduated from college, I got a fellowship to return to Mexico to study the music, and this time I went back with the express purpose of learning the instruments and learning to play the songs and take it seriously as a student of the music,” says Wax.

His entrenchment in this style of music opened new doors for Wax as a songwriter, influencing his art at every turn; “I saw a way that I could contribute to the conversation that I hadn’t seen earlier, there was a weird thing that was then happening in my songwriting that was bringing these two strands of music that I love together, and that feels like something that’s not out there already, and I felt liberated to explore it and not be hung on whether I was replicating something else.  I needed that to be able to go down this path, a vision that could sustain me, a reason that I was doing it,” he explains.

After leaving Mexico, Wax moved back to Boston, met multi-instrumentalist Suz Slezak, and the pair started the band.  As they traveled and performed around New England, Wax noticed that the music was really resonating with people, which he attributes to the lack of diversity in the Americana scene–audiences were ready for something different. David Wax Museum continued to gain momentum, opening for bands like the Avett Brothers (who became supporters of the band), and experienced a watershed moment when they performed at the renowned Newport Folk Festival.

Wax and Slezak got married, and they now have a little girl, Calliope, who travels with them.  As their ode to parenthood, the song “Everything Changes” from the new album says, “Everything changes/When two become three”, Wax confesses that things have indeed changed: “Being older, having done this for a while, and becoming a parent, it’s hard to separate it out, why my writing is changing.  I’ve heard people say you have a different sense of your own mortality when you become a parent, i guess I’m still sorting through all of that myself.  This record hopefully comes across with an added depth; i didn’t have this vision when i was younger, but Suz did, of a life where it was all tied up and integrated, your family life and your work life were unified, where you didn’t have to leave your kid at home when you went to work, you keep working and your kid is part of that.  I think for her it’s coming around full circle, this idea she’s had for a long time, of a way to be work and be engaged in a career but also be able to be a full time mom.  That works because we have a huge community of support behind us, we have a lot of family that come and help out on the road with our daughter.  It’s a lot more joyful to be touring as a family, it feels like a mini village, a gypsy caravan.  It feels like real life. There’s never a dull moment.”

One thought on “PREVIEW: DAVID WAX MUSEUM at THE HIGH WATT Tonight!!!”