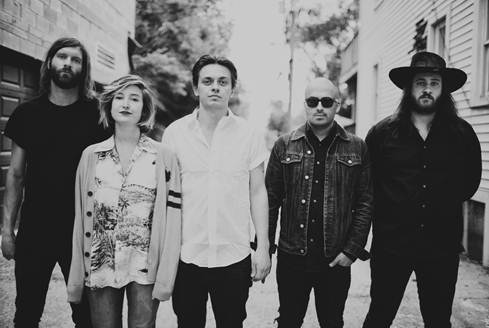 July Talk recently took a six week break to record, but are back on the road and set to perform at The High Watt in Nashville on Friday, November 6th. “We’re very excited to go back to Nashville.  We’ve played a few times, it feels good to play our music there, especially with all of the history.  We’ve been touring this record for a while, and this is our first major headlining tour, I guess you could say.  We’re really excited for the venues we get to play, Voodoo Fest in New Orleans, headlining the Bowery Ballroom for the first time, it’s kind of a bit of a milestone,” says Dreimanis.  A cursory glance at the band’s tour schedule could cause the faint at heart some serious anxiety, but co-lead vocalist Leah Fay says they aren’t fazed: “It’s actually a relief to be on tour like this right now, we’ve been in the studio for the past six weeks; days would start at 11 a.m. and end at 2 or 3 in the morning.  We’re all feeling relieved to be back on tour, even though we do have to do crazy things like drive cross-country in two days and take flights over night.”

The pair refer to themselves as a duet; Dreimanis’ blues-inspired growl is the yin to Fay’s yang–her more indie-oriented and delicate vocal approach. Again, if you’re looking for tradition, see above.  Reflecting on the intensity and inspiration behind their Juno Award-winning Alternative Album Of the Year, Dreimanis says, “We were establishing a new style for a duet, so a lot of the lyrics are about being our age and being full of adrenaline and passion.  Most of the duets you can draw from are based on the traditional ideas of what a man is and what a woman is.  It’s incredible and we love that stuff so much.  It was our opportunity to try represent a more honest version of who we are and see how gender fits into that by association. The album presented an opportunity for us to find out how to sing together, and how to confront each other within every verse and chorus, and learn how to be July Talk.”

Confront they do; the interaction between Dreimanis and Fay is emotional, and very physical.  “We started performing that way probably before we met, to an extent, and I think we were both physical performers no matter what we were doing.  When we met, that became this sort of very confrontational, physical performance.  We just really trust each other, and that trust has grown over the last four years on the road playing every night.  We have one rule we follow, we never say no to each other, we just trust each other.  It’s about always keeping that door open, allowing whatever to happen, whether it’s going to be painful or messy or embarrassing, or whatever it’s going to be.  It’s like letting yourself get pushed into any direction that the other person wants you to be.  It’s terrifying, but it’s fun to watch,” explains Dreimanis, with Fay adding, “When you say no is when everything fails. We’ve only said no maybe once before, and it’s a show I’ll always remember. It was the worst show ever.”

The physicality of their performance has, on at least one occasion, caused injury and the need for medical attention. “One time, we were playing in Munich and Peter smashed his face open with his guitar, and I kept trying to ice it, and I told him, ‘we need to go to the hospital right now,’ and he was like ‘no, I’m fine, I’m fine.’  He had a welt the size of a golf ball over his eye, with this massive cut, blood gushing out of his forehead and all over his shirt.  He’s also split my face open with his guitar before by accident,” recalls Fay. Dreimanis adds and  explains of the event, “What happened was, I had accidentally hit Leah in the face with my guitar prior to that.  We’re used thrashing around each other on stage and hoping that doesn’t happen.  We try to be pretty careful, but sometimes freak accidents occur in that kind of an environment.  My immediate reaction, because I was really fired up and full of adrenaline and whiskey was to hit myself in the face in turn, and we ended up going to a Munich hospital, which was actually an incredible experience.  Their health care is incredible.”